Just as a “preview of coming attractions,” in the next couple of weeks we’ll be rolling out two new Flowsana enhancements in response to two of the biggest requests we’ve gotten:

I’ll post an update here once these features are live in Flowsana.

A new Flowsana update is out, featuring three big additions that a lot of people have been asking for.

Add subtasks from a template

Now you can have Flowsana automatically add a predefined set of subtasks to a task based on any available If-Then Rule condition.

Here’s an example of such an If-Then Rule: 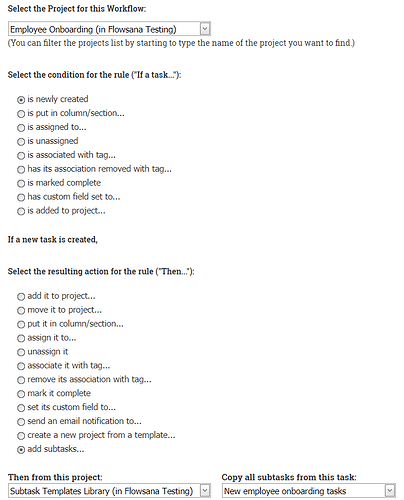 image697×862 41.8 KB
What this rule does is: whenever a new task is added to the “Employee Onboarding” project, that new task will automatically have added underneath of it the set of subtasks found underneath the “New employee onboarding tasks” task in the “Subtask Templates Library” project.

Note that the subtasks in your template can be fully-fleshed-out tasks; Flowsana will duplicate basically all elements of a task including description, tags, custom fields, dependencies, etc. And a given subtask can have it own subtasks, so you can nest multiple layers if needed.

Auto-create a new project from a template

Now you can have Flowsana automatically create a new project from a template, again based on any available If-Then Rule condition. 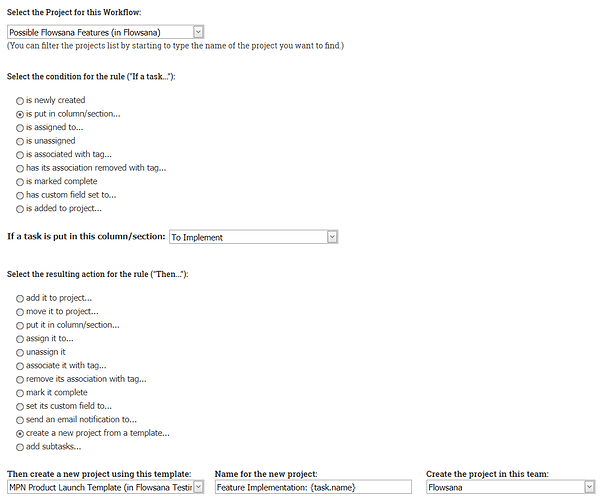 image1068×888 45.9 KB
What this rule does is: Any time a task in the “Possible Flowsana Features” project is moved into the “To Implement” column, a new project is automatically created, in the “Flowsana” team, based on the “MPN Product Launch Template” template, and the new project will be named “Feature Implementation: [followed by the name of the new task which triggered this rule]”.

However, there are many projects which need to key off of a project’s end date rather than a start date. Now you can automate this type of project workflow, known as a “workback workflow”, as well!

How does it work? Simple! When putting a template under Flowsana Dynamic Duration workflow control, simply check the “This is a workback workflow” checkbox.

Then, whenever you create a new workflow project from that template, you’ll enter a project Due Date instead of a Start Date.

When you do, Flowsana will assign the last (bottom) task in the project to be due on the project Due Date that you entered. Then it will automatically calculate and set all project tasks (based on their dependencies, as with any Flowsana workflow) working backward from that project ending date.

And whenever you modify tasks in the project, their dates will always be calculated backward so as to make sure that the project is always set to finish on the designated project Due Date.

Please note that Workback Workflow support is currently in beta; you’re encouraged to give it a try and let us know how it works for you!

6 Likes
Help, Please! - Copying Subtask Workflow
Automatically add subtasks from a template, auto-create new projects, automate your tasks from a project end date - new in Flowsana
Blog Template with Automatic Subtasks
When will Asana have a zap "create project from template"!?!?!
Using a groups of common tasks as building blocks for projects
Template Tasks as Subtasks
Form Submission
Adjust Task Title to include unique identifier
Custom Task Templates
Is there any feature creating a project automatically?
Add subtasks based on field selection
Adding subtasks as an action
Can a form submission open a new project?
Allow Rules for Subtasks
Allow Rules for Subtasks
Is it possible to use a task name to create a Project Automatically?
Allow Rules for Subtasks
Forms: Ability to have questions trigger a task/subtask creation & option to share/manipulate at form level
Rule: when a task is added to a certain project a list of sub-tasks automatically populate
Custom Task Templates
Zapier Integration to create subtasks
Duplicate Custom Project Template with Zapier
Flowsana enhancements: more new rules!
Copying subtasks when using a form
Is there a way to have rules automatically generate subtasks?
Can you set a project to repeat?
Subtasks: auto-populate or copy & paste a list of subtasks to a new task
Hotel, BnB, STR Use cases
Importing Clients to a Project with a Task Template
Subtask Dependencies
Jason_Woods September 18, 2019, 9:56pm #23

Great enhancement @Phil_Seeman, will definitely solve a couple of problems with the New Prospect workflow I am having trouble with.

Duplicate a project's rules to another project

This has been a highly-requested feature! Flowsana now provides the ability to duplicate or copy all of a project’s rules over to another project, thus saving you the considerable time and effort of recreating the same rules in multiple projects.

It’s quite simple to use:

Ability to group your workflows

In the workflows list on the Flowsana portal, you can now drag and drop a column into a “grouping” area to group your workflows by that column. And you can have multiple levels of groupings.

Here are a few examples… 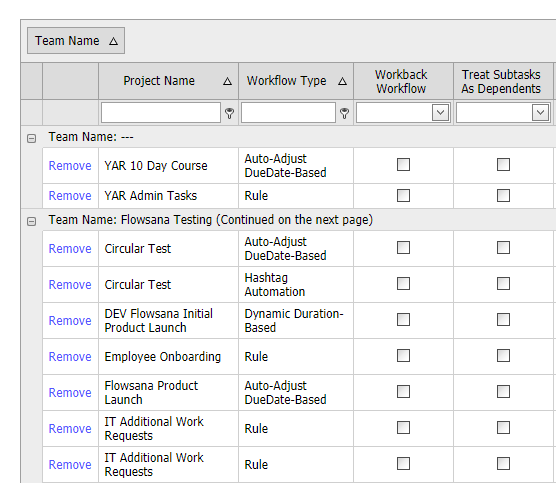 GROUPING BY WORKFLOW TYPE, THEN BY PROJECT: 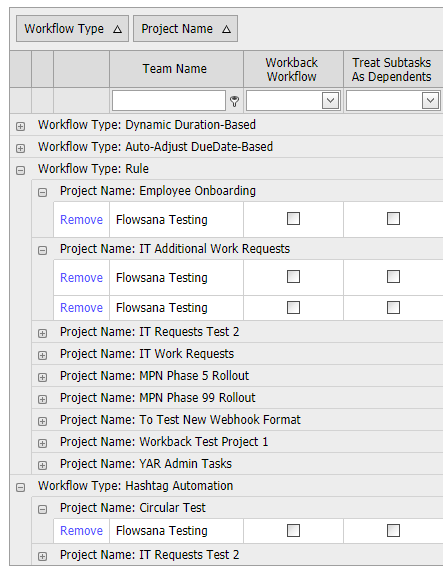 I just discovered the tool a week ago and have already added quite a few flows. New flow ideas keep popping in my head throughout each day - it’s crazy! I love this tool! Brilliant! Thank you!

Thanks so much for that great feedback, @Steven_Talbott - very happy to hear you’re loving Flowsana!

Correct - at present, rules are project-based only. This is not a Flowsana decision but an Asana limitation - currently Asana’s programming interface works strictly at the project level.

However, the reason I say “at present” and “currently” is that there are some changes coming from Asana which may alter this dynamic and make it possible to set workflows at a team level, for example. I can’t say more about that just now, but “watch this space”, as they say.

I just want to say that this is a fantastic addition to Asana. Great work.

I’m using the trial right now and I’m starting to create quite a lot of rule based automations. I’m wondering if there is a limit to the amount of workflows we can have and if increasing the number of workflows slows down lag time. I did notice that when I performed two operations that trigger workflows at the same time, the automations did not happen at the same time. they were about 6-7 seconds apart, almost as if it processed one them one at a time.

Thanks, @James_Campbell, that’s great to hear!

If you have multiple rules defined for one project, then that means all of those rules have to be evaluated whenever a task in that project changes (or is added). The rules do need to be evaluated one at a time as there can be potential interaction between rules. So in that sense, the more rules in a project, the more evaluation/execution time for them all. But also, it’s not that simple of an equation as there are lots of other factors influencing execution time, including but not limited to: the time it takes Asana to communicate that there was a change to Flowsana; the time it takes to record a change from an external app in an Asana task, which is not an instantaneous process; the load on the Flowsana servers at that moment; Asana’s rate limiting which limits the number of activities an external app can perform within a certain time span.

Announcing a new Forms Support feature in Flowsana! With this set of capabilities, you can do the following:

Have an email notification sent to the form submitter

You can choose to have form submitters automatically receive an email confirmation, letting them know their submission has been successfully received. The email will contain the contents of their submission; in addition, you have the ability to enter your own desired Subject line, as well as any text you want to put in the email body above the submission information.

Have Start Date and/or Due Date set

Whenever a form is submitted and it creates a task, you can have the task’s Start Date and/or Due Date automatically set. These dates can be based on either the form’s submission date or on a date the user enters in a form field. And you can define a number-of-days offset as well.

Here are some examples:

Have the task assigned to a user

You can choose to have the task automatically assigned to a user. You have two options: you can select a specific user and always have the form’s task assigned to that user, or you can have the assignee set from a field on the form.

(The first of those options is already available as part of Asana Forms on the Asana Business-level subscription, but this makes it available to Premium users.)

2 Likes
Set Due Date from Form entry
No Email Notifications for Forms?
Easiest way to get form to reply?
Enhanced Forms support - now with Flowsana you can set a form’s due date, assignee; send confirmation email to submitters
Create custom field with multi-select options to use with Forms
Terra_Melia March 23, 2020, 8:03pm #34

Thanks for your interest in Flowsana! If you can email a note to support@flowsana.net and describe a little bit about what you’re hoping to do with Flowsana, I will get back to you. Thanks again!

Hi @Phil_Seeman! I’m excited to discover Flowsana. I’m currently looking for a way to sync up 2 projects within Asana meaning if I update one, the other will be updated as well.

I’m not 100% clear on your goal… Are you looking to have a set of tasks where each task appears in both the Internal and External Tracker (i.e the same task would show in both projects), or you’re wanting the two Trackers to each have a separate list of tasks from the other but each task in the two lists would be a mirror of an equivalent task in the other and each “pair” of equivalent tasks stays in sync? Or something else which I’m not getting?

@Phil_Seeman thanks for responding. I was able to set up Asana rules to accomplish what I wanted.

This is our biggest challenge to any of the forms and form integrations, (aside from auto creation of subtasks) - we are constantly creating new projects, including a new weekly project task list each week. Having a form (i.e. creative brief / job submission) that can be applied to an umbrella of projects, vs having to continually recreate the same forms… a MUST. Anymore news or solutions on this?

Hi @Christine_Andrews and welcome to the forum!

having to continually recreate the same forms

Afraid there is no news on this, it’s still necessary to recreate the form for each new project.

In case you’re not aware, Flowsana can definitely handle this via its rule condition “Add Subtasks from a Template”.

Thanks you @Phil_Seeman thats great! My dream - personalized subtasks auto added from a form, w individual, dependent due dates