I do not know if it is technically feasible but it would be a great feature to be able to use OR/AND operators in workflow rules?
ie
If a task has custom field ‘Product’ set to a value of ‘Option A’ OR ‘Option B’ OR ‘Option C’, then assign it to ‘User A’.

I’d be interested to know your solution because I have a similar problem - though it happens to be all within the same company. We’d like to have a project - brochure for example - with creative and proofreading reviews visible to the design team but not yet to the requester.

Yes, boolean operators in rules (that’s the geeky technical description of your request) is something I’m thinking about!

The following new features are now live in Flowsana:

Now you can convert a task to an Approval as the result of a Flowsana rule being triggered. For example: 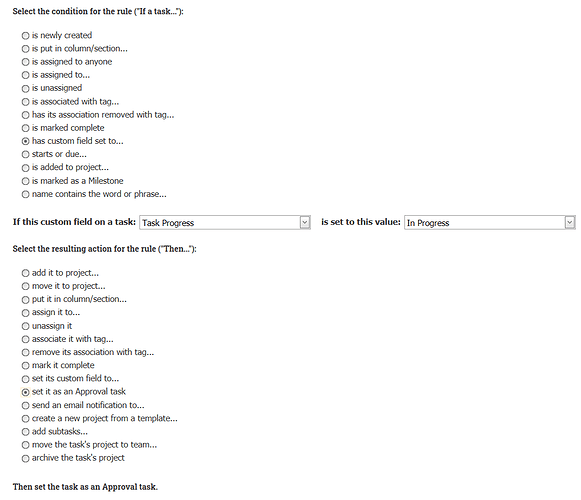 Now when creating a Flowsana rule action to update a custom field's value, you can leave the value blank. When you do this, you're telling Flowsana to remove (i.e. blank out) the current value in that field.


Note that you can do this for any custom field type: drop-down list, text, or number.

Include weekend days in your workflow

By default, Flowsana skips weekend days when calculating shifts in dates and setting the adjusted date. Now when creating a workflow, you have the ability to tell Flowsana that it should not skip weekends for that workflow, and should include all 7 days of the week when calculating and setting dates. This is done by unchecking the Skip Weekends box when defining a workflow: 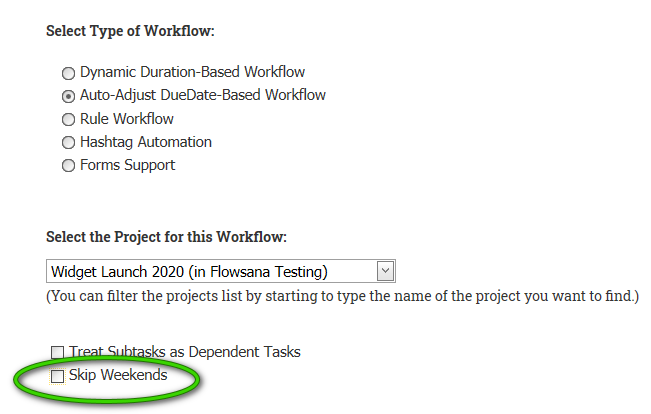 Improved performance for the "Add subtasks from a template" rule action

You should now see much less delay in Flowsana creating subtasks as a result of the "Add subtasks form a template" rule action. (This action has proved to be extremely popular, moreso than we were expecting!)


Previously, all rules triggering this action went into just one “queue” for processing, meaning you could potentially have to wait for a number of other users’ subtasks to copy before yours. There are now 16 queues instead of one, so your wait times should be vastly reduced if not eliminated altogther.

2 Likes
Flowsana update: New rule action to set a task to be an Approval. Remove any custom field value. Include weekend days in your workflows.
RiccoZorzo July 3, 2020, 1:20am #46

Hi i recently found your flowsana and have a rule setup to where it copies subtasks from a template to all new taks that are created in a project works really well and its somthing ive been looking at doing for a while now, my only question is that is there a way to edit a rule thats been created or not?

is there a way to edit a rule thats been created or not?

Not currently, sorry; you’ll need to remove the rule and add a new one. Rule edit capability is on the Flowsana development to-do list!

Thanks fort he reply, also what is the costing by the way?

@Phil_Seeman any idea why I don’t see the new rule action “set task as approval task”? 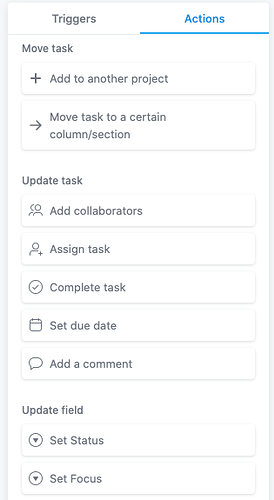 Flowsana is $2.99 USD per month per Billable User. Billable Users are Asana users (full users only, guests are not charged for) that are members of teams which contain workflow-enabled projects.

If you have pricing questions about your specific case, please feel free to send them to support@flowsana.net and we can discuss in detail there.

any idea why I don’t see the new rule action “set task as approval task”?

You’re looking at Asana’s rules. Flowsana has its own rule capability (rules are defined on the Flowsana web portal) separate from Asana’s.

(If you’re wondering why they need to be separate, Asana’s rules are not accessible to external applications so the two can’t be combined.)

I am a new Flowsana user, testing out the free trial. I tried to set a rule when a new task is created, a set of subtasks from my subtask library are to populate. When I see it in my workflow list, it says " If a new task is created, then add the subtasks of the task ‘[task not found]’ in the ‘Subtask Templates Library’ project."

The task I am copying the subtasks from was available to select in the drop down when I set it up, but it does not seem to be recognizing it?? What am I doing wrong?

Please wait for an email that indicates the project has been set up in Flowsana, then you can start testing it out. There’s a bit of a backlog at the moment in setting up new workflows (I’m investigating it now to see if there’s an issue.)

Will do! Since this is my first workflow set up, I did not realize there would be a slight delay with the set up. Thank you so much!

No worries! You should be all set to go now.

I have a small update to announce for Flowsana.

When you’re building a rule and use the rule action “Create a new project from a template”, one of the things you do is tell Flowsana the name to use for the new project.

Previously there was one “variable replacement” option available: you could put {task.Name} and it would replace that with the name of the task; for example you could enter this in the new-project-name field:

and end up with a project called, for example:

Now with this update, in addition to the task’s name, you can specify the name of any custom field and it will do a replacement with the value of that field.

Say instead of using the task name in the above example, you have a form which prompts for the new employee’s name and puts it in a custom field called New Employee’s Name.

Now you can specify this in the rule’s new-project-name field:

and end up with the same format of project name of, for example:

With your tool, can an email be sent to a team member or external (outside of Asana) stakeholder to view the public link (and submission details?)

If I understand the question, probably not.

Flowsana can be configured to send a confirmation email to an email address that the submitter enters on the form, but not to any additional people.

Also Flowsana has a rule action to send a notification email when a condition is met (and that condition could be that a new form task is created), but the options for recipients for that notification email are: the task’s assignee, the task’s collaborators, or all project members. It sounds like in your case you want it to go to someone other than that (but I’m not 100% sure of that).

You’ve understood correctly, Phil. That’s exactly what I’m looking to do. Thanks for the detailed explanation of how your tool works in this case.

does anyone know if you have collaborators in a template and then have flowsana copy that template to a new task does it also copy collaborators as well.?

YES, if you’re referring to the “create subtasks from a template” rule action, Flowsana will copy the collaborators from the subtask in the template to the new subtask it creates.