This incredibly useful feature is completely hidden in the Asana user interface and I don’t think it’s documented either, but it’s been there forever and good to remember about. 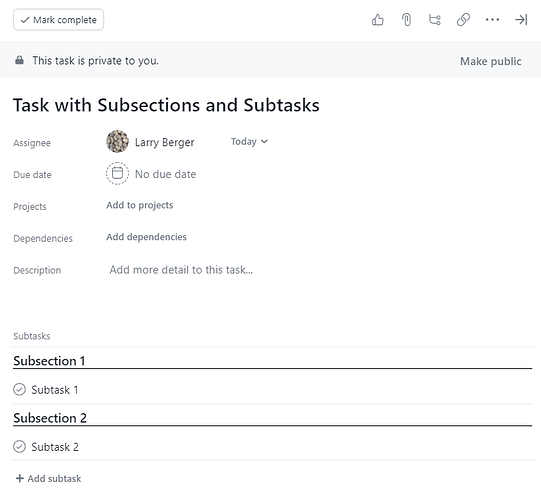 The trick to adding a Subsection is to:

34 Likes
Underline the heading of a section
Ability to add sub-sections
How can I create headings in subtasks?
How to create subtasks headers?
How to add a separator in subtasks
how to format sections text
2021: The Year in Review
Phil_Seeman June 6, 2021, 10:37pm #2

The only thing I would mention on the negative side of this feature is that visually subtask sections look like regular sections (i.e. top-level sections in a project) but they are not - they act wholly different from regular sections.

(And for the technically-minded, from a development/API perspective, subtask sections are called separators to distinguish them from true sections.)

Thanks, @Phil_Seeman. All key points. Thanks for making this tip complete!

THANK YOU! I thought this feature had disappeared!

I am currently training staff to use subtasks more, the problem we are facing is that “Sub Tasks” do not show the “Project Name” when viewed in the “My Tasks” window.

If you change/add the “project name” to the sub tasks while in the “My Task” view it automatically duplicates the “Sub Tasks” and adds it as a main/parent “Task” in the project. But if you mark this duplicate complete both the duplicate task and the original subtask are affected.

You’ve highlighted a couple of large and well-established issues! I’ll point you to some resources here.

“Sub Tasks” do not show the “Project Name” when viewed in the “My Tasks” window.

Here’s a (long) discussion of this topic and a place you can vote for a change:

Show project on subtask in 'My tasks' view Product Feedback

When subtasks are assigned to a person and they show up in the ‘My tasks’ view, there is no project ‘tag’ visible on that subtask. There is a reference to the parent task, but therefore I have to look up the parent task first and check to which project that task belongs. It would be more efficiently to directly show the project tag on each subtask.

If you change/add the “project name” to the sub tasks while in the “My Task” view it automatically duplicates the “Sub Tasks” and adds it as a main/parent “Task” in the project.

It’s not actually a duplicate; it is the same (sub)task just being displayed twice in two different places. That’s why if you change one, it changes the other, because it’s literally the same object.

Whether to use subtasks or not is pretty much of a religious argument here - some swear by them, many discourage their use due to the the quirks you’ve mentioned (and a few others), some organizations flat-out prohibit their use. Here are a few threads on the matter of subtasks:

To Subtask or not to Subtask Use Cases

I made a comment on another thread that I’m not a big fan of subtasks, and @Alexis asked me to elaborate—so here we go! It’s not that subtasks don’t have value, I just think they are easily overused by people (especially when they are new to Asana). They actually have a number of limitations, so I try to use sections and tasks instead of tasks and subtasks. Here’s a list of some of the biggest negatives in my opinion: It is MUCH harder to access information at a glance when using subtasks. Y…

Once upon a time, there was a young farmer with the name @Jerod_Hillard . He was known as Jerod the unwise. Thirsty for adventure, he decided to go against all odds and to enter the subtask maze. Everyone advised against it, arguing he was not wise enough to navigate such a maze without a proper training. [image-20170119-26567-1bsql2r] He entered the maze, and as he was going deeper and deeper into the levels, he lost his way. After years of errance he was finally able to find the exit the su…

While it doesn’t directly address your specifics points, you might also find this thread useful:

Hi all, Asana isn’t perfect or at least isn’t perfect for everyone. Like any software, there are open feature requests and some of them are hosting really heated debates! I believe the workarounds available are not always easy to extract from the conversations and figured I would list them together here! PS: I numbered the features and workarounds to allow for easy discussion in the comments.

This thread is not meant to host discussions about the feature requests themselves! P…

I was going to thank Jackie for confirming to me that I wasn’t MAD and that my UX with Sub-Tasks was exactly the same as hers (i*.e. no Project Name in the My Tasks column AND when you think you’re being clever/efficient and flag it to a Project, it replicates the task

!*) I accept, Phil, that it’s not a genuine duplicate but it does take up screen territory in Board view and it can be confusing for the unwary (that would be me).

Ignoring the religious argument for a moment (and I’m an un-reconverted lapsed Catholic) could we not be ecumenical and allow it as a User Setting (On/Off) for the likes of Jackie and me and allow those of all faiths to choose according to their Use Case?

Thanks for your candid and useful feedback, Phil.

It would also be extremely useful to have “Add as *Subtask to other Project/Task”.

Thank you Chris!
I am a consultant for Asana integration, helping interior design firms use this program as their task management software for their team.
It would be great to see the solution, and in the meantime continue to direct my clients organizations to avoid subtasks as much as possible that need to show a project tag/ assignee and utilize them more for lists or steps of the parent task.

This is definitely a useful feature I was not aware of! It helps to keep subtasks organized and looking forward to trying them out in my projects. Thank you, @lpb

This is a HIGHLY important thing to remember. Visual v. Functional design considerations are important of UX, especially during implementation or trying to convert users.

Having no subsections caused me to be disorganized and dificalty to find the things I need.

Hey !
Looks like something hase changed in the way subsection are displayed under a tasks (see my screenshot). From now therer is no différence (bold text) on the left panel toggle.
Thats realy anoying !

Reported this as a bug:

Briefly describe (1-2 sentences) the Bug you’re experiencing: Subtask Sections no longer appear with formatting different from other tasks in the main tasks list pane as they used to. @Fabien_Moreno already posted this so I’ll just refer to his post but the exact same thing is happening to me. Steps to reproduce: Create a task with a subtask section then view it in the main tasks list pane Browser version: Current Chrome Upload screenshots below: [image]