Request: A task’s due date should be shown as the due date of the parent task, unless manually overridden.

1 Like
SubTasks should inherit all parent properties
Subtasks visual hierarchy
Completed sub-tasks showing up as incomplete when parent recurring task is set to complete
Aneri May 2, 2018, 3:15pm #2

Currently on creation of a SubTask it inherits no properties of its parents i.e Task, Project and Workspace. But I am not aware why Asana does this. It sure can’t be for flexibility, else it would be called a SubTask, instead it should be called an independent task.

But more importantly, when a subtask is added to a parent task which in turn belongs to a task, by nature it means, it is to inherit all its parents(workspace, project, parent task) behaviours, and also show in the dashboard as a respective tree. What is the reason for ASANA to deviate from this behaviour?

If the idea was to give a subtask for a task independent of all parent association it could simple a toggle button and left to the user to customize it accordingly. Besides a task inherits the parent behaviours of project and workspace, so why wouldn’t a subtask?

I agree that there should be an option somewhere for each user to define which properties of the parent task are inherited by subtasks by default. For the way I use subtasks, it would be very useful for the assignee and project to be automatically inherited. I can certainly imagine cases where the assignee would not be the same by default, but if a subtask is related to the parent task then it seems logical that it would belong to the same project in most cases. Though I often have different due dates for my subtasks, I think it is reasonable default behavior to have this inherited from the parent task as well.

Agreed. Without this, my tasks are taking my 20 times longer to create. FML.

I agree that there should be an option somewhere for each user to define which properties of the parent task are inherited by subtasks by default. For the way I use subtasks, it would be very useful for the assignee and project to be automatically inherited. I can certainly imagine cases where the assignee would not be the same by default, but if a subtask is related to the parent task then it seems logical that it would belong to the same project in most cases. Though I often have different due dates for my subtasks, I think it is reasonable default behavior to have this inherited from the parent task as well.

This is brilliant. This seems like the most backward-compatible way of doing this, so defaults can be originally set to what they are now and people’s workflows won’t change unless they want them to.

Hey there
When using Asana I often get assigned subtasks which obviously have a parent (with a due date). However when using My Tasks (and generally throughout the system) the visual hierarchy and layout of subtasks is really below par.

See attached screenshot. The 4 ‘no due dates’ tasks are actually sub tasks of the due date tasks but the UI here doesn’t show this at all. Why not place subtasks underneath the parent task, indented, and have a greyed out date if no specific date is set on the subtask (that takes from the parent task).

This would be so helpful to many I’m sure. This is only in the My Tasks section, they also need extra work in the kanban board and other areas IMO.

I am using the new task template quite excessively. However, what I am missing is a function to have due dates relative to the due date of the main task. E.g. Main task is due on a Tuesday, so the subtasks should be due 2 days prior to that.

This would also be useful for project templates. We are organizing events in our team, where the procedure is always the same.

E.g.:
Event on a specific date

Hi @JBlumenberg, welcome to the Asana Community Forum and thanks for sharing your feedback with us. We already have a thread on this topic so I’ve gone ahead and merged your post with Subtask Inherit due date from parent task to consolidate feedback!

I am not sure if that is really the same thing. What Id want is a feature which allows me to set a date relatively prior to another; atm it is only possible to set it after a date.

@Emily_Roman I’d like to see a similar feature as @JBlumenberg and it’s indeed not the same as the request you merged it with. Is there any active thread that allows this:

Formy workflow it would be very helpful, together with the feature to not plan any recurring tasks/subtasks on the weekend days. I’m trying to get more elaborate processes of construction projects into Asana. 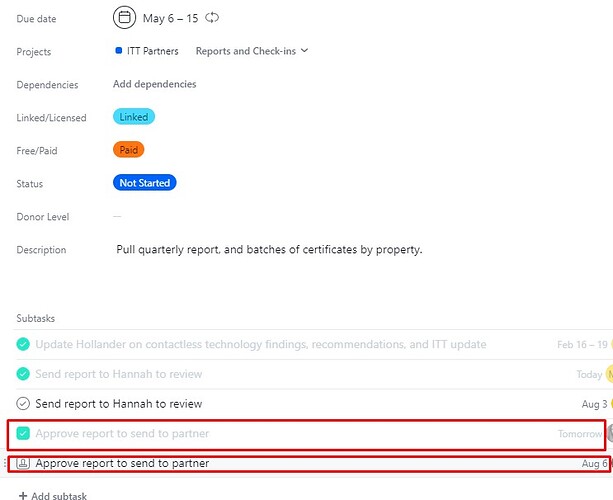 Hi @Danae_Bowers, thanks for reaching out!

Hopefully this is something our Product team update in the future. I’ll keep you posted if any changes are made!

We’ve been having a lot of trouble with recurring top level tasks and the subtasks that belong to them.

You basically combined the two most complex stuff in Asana at the moment: recurring tasks and subtasks

If possible, try to remove the recurring from the equation by creating several tasks in advance. There are tricks to generate many identical tasks quite easily.

Thanks for getting back to me, @Danae_Bowers. This is not expected behaviour! Would you be able to provide me with a screencast of the issue occurring? This way I can escalate if needed

Hi @Danae_Bowers, I can’t speak to this particular bug, but you might want to consider using a template task for this kind of thing. See Introducing templates, for Tasks! You will have to create a new task each time, but a template allows you to do so with a single click, and it avoids issues of whether subtasks are completed or not.

Just in case it helps!

We have the same issue in our organization with a major monthly deliverable. I really hope this is an issue that Asana resolves. It is very frustrating and seems illogical that a recurring head task doesn’t feed into the subtask dates.

Is this feature available yet? It’s a huge miss if not.

Agree we are still waiting for this to be corrected. It kinda makes the subtask feature on recurring tasks pointless and a ton of busy work to go update every month,

It would truly save so much time if there was a function for subtasks to inherit due dates from parent task card. The moment you change the due date on parent task, subtasks will immediately change to reflect the same. That would be a life saver! But for now, it’s a manual change of due dates for the subtasks which can be quite time-consuming.