With the newly released customizable My Tasks page, it does not seem to auto-promote task that have recently been “unblocked”.

For example, previously - If I have moved a task to a section called “Later” because it had no date and was blocked by another task (assigned to a colleague), when the blocking task was completed, it would auto-promote to “Recently Assigned”.

With the new sections in My Tasks, custom rules are required for auto-promotion and creating this rule is not possible (unless you pay more?). I would really like this ability returned, as it is quite logical for the core of Asana: Triaging work to select your daily tasks…

That’s funny I never realized that was the case before

You can recreate this with the existing rules, I believe they would be available in My Tasks v2 (but I don’t have it so I can’t check). That trigger is on the Business plan only though…

As a premium user, does that mean I am out of luck? Even when My Tasks V2 is released? I currently only have three rules available.

If that is the case - that would be very unfortunate as it totally renders blocking tasks much less useful (borderline useless or even counter productive?). Not very nice to provide a feature only to take it away later…

I believe you are blocked indeed because that trigger won’t be available to free and Premium… @LEGGO @Julien_RENAUD @lpb @Phil_Seeman @Rashad_Issa any other idea?

Perhaps @Forum-team could weigh in to confirm if this is a loss of functionality with My Tasks v2 and if there’s a workaround.

I can’t think of one; I don’t see how Advanced Search could help; that came to mind but I don’t think anything pans out there.

I voted for this and encourage the others to do so.

I was not aware of the feature that would promote tasks to recently assigned when their blocked tasks have been completed.

I have not yet had access to MyTasks V2 so I am unable to check any workaround it. Sorry!

I seem to recall receiving a notification in Asana Inbox. Does that occur still? Or is it possible that’s only whatever occurred???

Similar boat as the rest. I’m also not on My Tasks V2 yet and had no idea dependencies fed into auto promotion. Is there documentation on this? Seems like quite the Easter egg - very powerful consideration for the auto promotion workflow. You have my vote that this feature be restored for all license levels.

A notification is still received - which is a half solution, I would say.

Now I am second guessing myself whether it ever auto-promoted in the first place. I was quite sure it did…

Regardless - I think a suitable feature for all licenses levels would be to allow for creation of a Rule that “When Task is Unblocked → move to section”. This would enhance the Dependencies feature (if it didnt already exists in My Tasks V1) and restore the use case in V2.

I agree, your post is a product feedback so @Rebecca_McGrath and the team now has visibility on it as a request from the community.

Hi all, our Product team has confirmed that this functionality was not available in the previous My Tasks version.

@Jeff_Bethune, you can create a Rule to allow newly unblocked tasks to move to a specific section in your My Tasks. Please see below 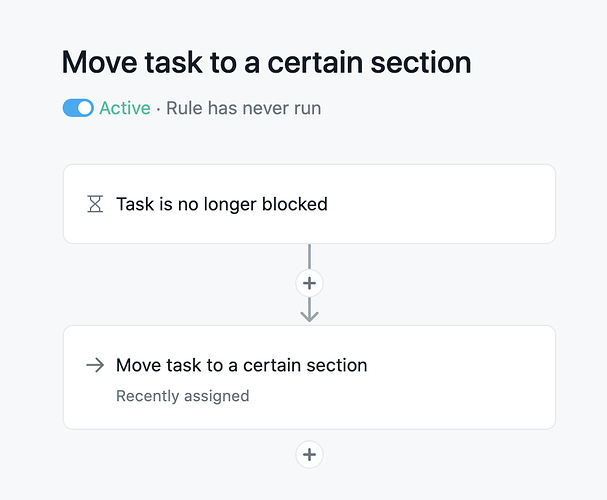 I hope this helps!

Thanks for the clarification. I suppose I was just dreaming about the previous version - it does make sense though…

Regarding the rule creation, I only have three options for generating rules… 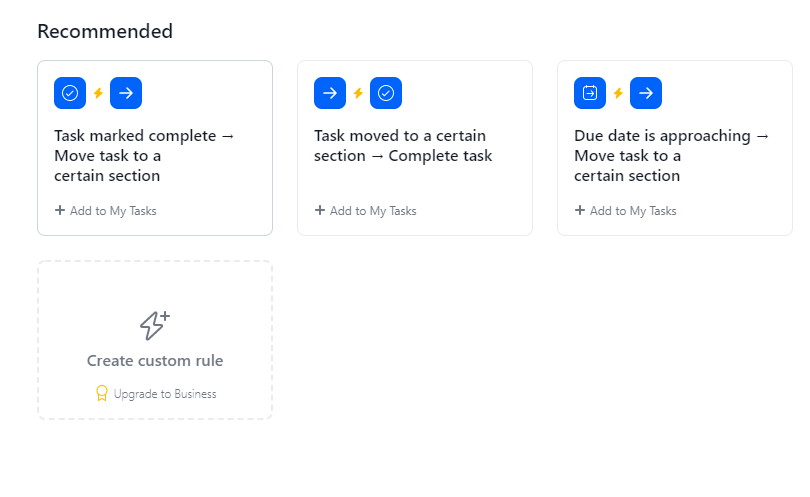 As mentioned by @Bastien_Siebman, this rule creation is available to all Business users!