The rules that I have added to “My Tasks” only partially works. Some of my tasks get moved to the correct sections, while others do not, or get added to the wrong section.

Above image shows “My Tasks” section where rule is set to “Move to ‘Due This Week!’” section 7 days before task is due. Tasks in question are not yet due for another 12 days.

Above image shows section titled “Due Next Week” (title not visible in photo), where rule is set to “Move to ‘Due Next Week’ section” “14 days before task is due”.

Hoping to teach my team how to customize their My Tasks section, but don’t feel confident when I’m experiencing these issues with rules!

Perhaps I’m running into problems because multiple rules are running? There are 4 total in My Tasks, which are all about moving the task to a section.

Can we see all the rules you have defined?
From my experience, there haven’t been any bug on rules and My Tasks lately; so it is likely overlapping/colliding rules… 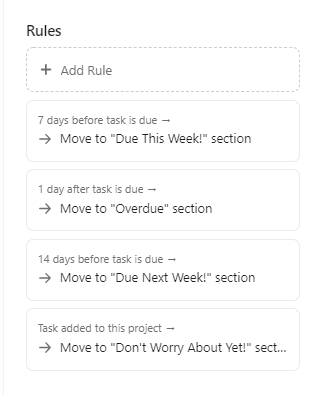 Can you check the history (above comments) of a task that is in the wrong section? To see what lead it to be there?
You don’t seem to have conflicting rules.

The history doesn’t seem to give me much insight - perhaps you’ll see something I don’t? 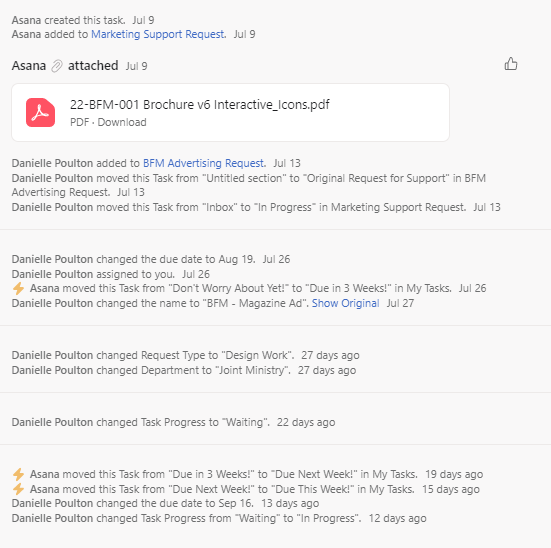 Above image corresponds to task appearing in “Due Next Week”

I am bit lost sorry, I would need to see it live to understand and investigate.

We can see on the first image that the rule moved the task, and then someone changed the due date, so maybe it was indeed due this week before the due date change (making it normal for the task to be there since you don’t have a rule to move it out).

For the second image, it baffles me. We can see the due date being changed to April 2023, but still the task was moved to “due next week”…

It never occurred to me that I would need a rule to remove it - thanks! That at least helps me understand that one.

The others, still not sure!

I really appreciate you taking the time to help me out!

Regarding the second image before the due date in 2023 was added what due date did this task have?
Because it says the due date was changed on June 17th exactly when the rule run.
Now since rules always run around midnight maybe something overlapped here.
When you hover over these dates in the comment section it should show the exact time when an action was performed.

Did you experience the same problem recently on a newer task also?

Okay, when looking through the details of each change

That’s the full history that I see. So, I don’t think there was a due date prior to the April 26th one. The project was created from a template on June 17th at 3:00pm.

I haven’t really observed if newer tasks are being added incorrectly - many of our tasks are/projects are added a few months in advance. I’ll have to pay closer attention the next time I create one that’s not due for a little while!

But, knowing that rules run at midnight and that once a task has migrated to a section, a change of due date won’t trigger it to leave that section actually helps my understanding quite a bit!

I see. Okay yeah so I‘d definitely recommend monitoring how rules run for other tasks to see if there are any weird things happening. But yeah keep in mind that any date related rules always run around midnight your timezone

This topic was automatically closed 16 days after the last reply. New replies are no longer allowed.