Prevent dependencies from being marked complete

I love the idea of task dependencies, but they’re not fully functional as is.

If I have a task (Eat dinner) waiting on two sub-tasks (go shopping, cook dinner), “Eat Dinner” should be grayed out or otherwise uncheckable (is that a word? No? Oh.) until I’ve done the necessary subtasks.

As is, I can go in and complete “Eat dinner” without having shopped or cooked. Without sub-tasks viewable in tree-view by default (ooh! do that!), it could be easy to skip an important step and check something off as complete when it’s not. Thanks!

You’re describing useful features for viewing tasks within projects. I’d piggyback on that by asking for similar features when viewing tasks within My Tasks. I have a long list of template and dependent tasks cluttering up My Tasks, which by definition I can’t do anything with. I’d love a way to automatically group or hide these items.

I’ll have 22 tasks due “This Week,” and it can be overwhelming because I really only have 3-4 tasks that I need to do right now… before I can even get to the other ones.

I never even thought of that. GENIUS!

I echo this feature request. Some kind of indicator in the task list on tasks that are marked as “Waiting On” would be very helpful. If that task were displayed with muted formatting (e.g., decreased opacity for entire row), the task would still be a visible reminder. Adding a little hourglass icon on the right would further indicate its dependent status. Ooh, hovering over the hourglass could show which task it is dependent on. Here’s a quick example screenshot:

I also agree with @Craig_Fifer about having the option to hide dependent tasks when desired. Although, I wouldn’t want them automatically grouped, especially if I’ve marked it for Today.

I agree. By now in Asana it’s possibile to complete a task even if it’s dependencies aren’t completed.

Does anyone know whether something like this is coming? My team really likes the idea of Asana, and we’re paying for the premium version right now, but I’m not going to be able to keep up with the admin if the “do this now” emails that my team gets include tasks that they can’t do yet.

I really like Joe’s suggestion to gray out tasks that aren’t actionable yet. Also incredibly useful (and I’m not the first to suggest this) would be setting task due dates automatically based on dependency rules – being able to set a rule such that whenever task A is completed, task B’s due date gets automatically set to N days later.

My company currently uses Asana and has been for 8 months now.

We are literally looking through countless other programs to switch to currently because this is a such a crippling problem for us.

We have a template project setup. The problem is things get pushed back in their timeline. So if an employee has a chain of 10 tasks to do each dependent on one another and they get pushed back a day they have to change each date one by one; which typically breaks down after awhile.

Then there’s a backlog of over due tasks and it’s impossible to see what is actually late and needs to be done!

Please comment on this Asana, there have been no promise of a fix in the future and my company is gone the moment we find a software that solves this issue.

It would be nice if a Task-A which was dependent on another Task-B would not be able to be completed until Task-B was completed.

Thanks for your feedback @Laurent_Saint-Louis! We already have a thread dealing with this issue

https://forum.asana.com/t/feature-request-making-dependencies-matter/1477 so if you don’t mind, I’ll merge your post into the main one. You can also go ahead and add your vote on this main thread!

Hi there, If I have Task A and Task B is dependent on Task A being completed, I assumed that I could not mark Task B completed until Task A is completed. But that doesn’t seem to be the case - I can complete Task B anytime, even if A is not done.

Is this correct or a bug?

I had the same question. It would make sense that you shouldn’t be able to check off an item if the dependant isn’t complete.

Yes currently that is how it works there is no validation checking between the tasks that stops this from occurring.

Similar to if you have SubTasks under a task you can complete the parent tasks before the SubTasks are completed.

If I could vote on this 1000 times I would. Having a paid “premium” feature that doesn’t actually fulfill even the definition of the name itself, surely demands some form on feedback from Asana.

Agree! There’s no reason I should be seeing anything I can’t take immediate action on. Def. need for a filter to hide dependent tasks.

Any update on this feature? or at least being able to hide blocked tasks from the My Task view?

This feature is definitely necessary!
Tip: may let the project owner choose to enforce or not dependencies (as @Laurent_Saint-Louis described)

Dear Team, is there any update on this feature ? It seems logical to have it and would ensure better streamlining of the work for many of us. Many thanks for your update

Asana’s behavior has been updated since this thread was started - it now provides partly what is being asked for here, but not everything.

Now when you are in a project’s list view, you can no longer mark a dependent task complete. Clicking the dependency icon will not complete the task, and when you hover over that icon, it shows “Waiting on N tasks”.

This doesn’t apply to the task’s detail pane, though; you can still mark a dependent task complete there.

I have just created a solution. But it does need you to install a GreaseMonkey script in your browser. Grab the script from here: 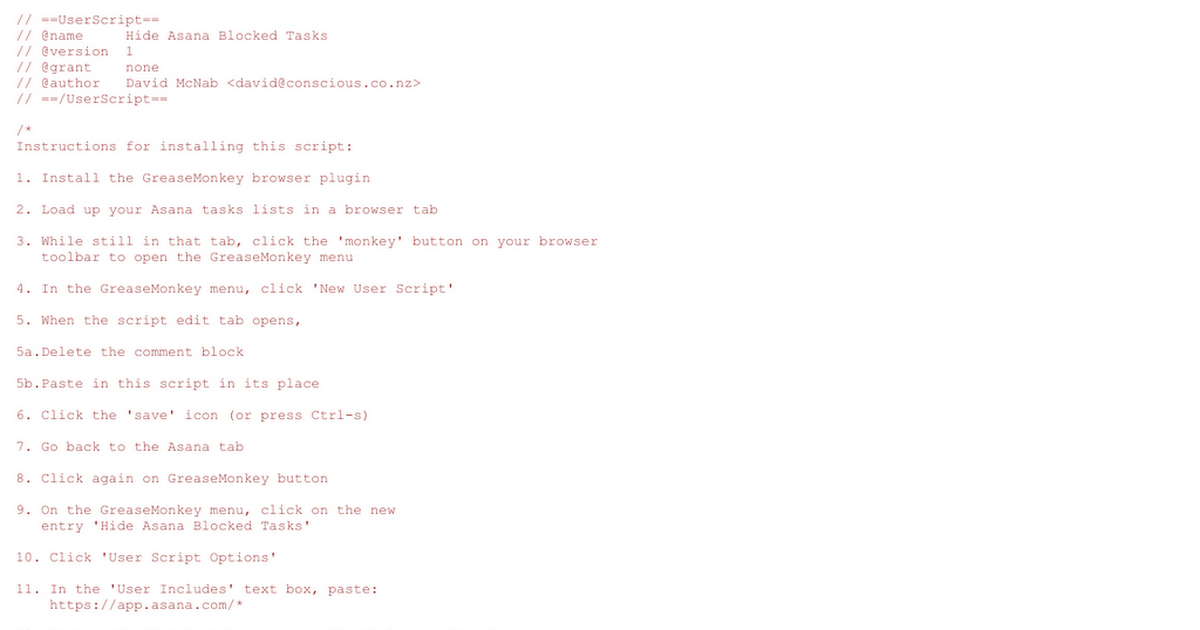 Installation and setup instructions are within the script. Once the script is installed and set up correctly, you should be able to refresh the Asana tasks tab and see a new button appear at the top, labelled ‘Show Blocked’ or ‘Hide Blocked’.

This is a screenshot showing the button