Oof I cannot emphasize enough how much I need the ability to have the same task template across projects and teams! Currently on business, would happily upgrade to premium for that ability.

Currently on business, would happily upgrade to premium for that ability

Business is above Premium

(and Enterprise is above all)

Oh Bastien, let’s be honest, is my accidental flipping of business and premium really the problem here? or is it that people have been asking for a feature for more than a year to no avail?

Oh Bastien, let’s be honest, is my accidental flipping of business and premium really the problem here?

Sorry I was trying to be funny

or is it that people have been asking for a feature for more than a year to no avail?

An answer was given in October last year, no answer since then means the same answer applies. Asana does not communicate on the roadmap, like most competitors, and the number of people asking for a feature is one element to decide, not the only one.

I would love this as well. We’ve had to resort to making a template project and duplicating tasks from that project in order to save time. Honestly allowing template tasks to be shared across all projects would make working within Asana much easier.

Agree with all the above, A templates library would be amazing. My team uses workspaces for each client - if we could leverage a library of templates to pull from - project, task, forms that we could select when we create a new project would be a huge time saver, at this point, we have to create every time which defeats the purpose of templates. Is there an update on if this is in the queue for development? It would be a game changer

While most is a fairly relative term, @Bastien_Siebman is right, companies like Smartsheet, Trello, and Monday.com don’t have a public roadmap.

Having a public roadmap isn’t always the answer though.

Wrike has one and they still barely get anything launched. ClickUp launches new features so often that it just breaks half the time. Scoro is fairly consistent and bug free—but with a wonderful price tag to go along with it (we combined it with Asana to finally make things work the way we needed them to). 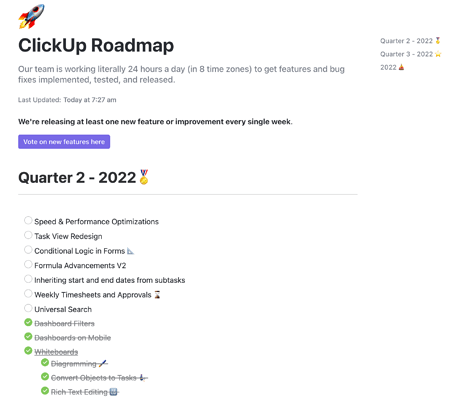 Adding on to echo what everyone else has said. Task templates are amazing and such a timesaver but completely misses the mark to have to recreate the template across different projects.

I have a Team that will have an ongoing 40-100 projects in it at any given time that THE WHOLE company uses, and I really need to be able to add/remove a Task Template from them all at once.

We have certain tasks, that are required for every launch, and to have those defined and accessible as a task template, in the templates library, to be leveraged on various projects all requiring the same launch support would be a HUGE time saver.

It’s crazy that this still isn’t addressed. Lots of us seem to need it. Looking forward to this

We really need this. Our staff has 14 projects and it’s wild that we cannot use the same template across projects.

AT LEAST SET TASK TEMPLATES AT THE TEAM LEVEL!!!

Any update on this? Lacking this basic functionality is likely to move my team to a different platform.

Lacking this basic functionality is likely to move my team to a different platform.

No update on this sorry. The entire Asana adoption is tied to this specific feature?

Did you check out my “task factory” concept as a workaround?

FYI we’ve introduced a new “Add tasks…” rule action to Flowsana - it’s not exactly the same as task templates as it adds task(s) as the result of a rule trigger, not by user interaction; but it might be helpful in some use cases being discussed here.

Basically it’s just like the Flowsana “Add subtasks…” rule action except it lets you add one or more top-level tasks to a project (and those can have subtasks). Because those “template tasks” are created and stored in one separate project, you can reference those tasks in rules within any number of projects, so you only have one instance of the “template”, instead of having to keep and maintain task templates in each project.

This is a pretty essential feature. Has anyone yet confirmed if Asana have it n their roadmap?

Has anyone yet confirmed if Asana have it n their roadmap?

Hi @Jon_Burdon and welcome to the forum,

Asana’s policy is not to publish a public roadmap or comment on future features, so we’ll just have to wait and see if it gets added at some point.

Yes, I understand. Asana has this issue as well at times, where its rules fire before one has finished typing the name of a task, for example. It seems both apps are a victim of our success, so to speak - rules are often firing faster now than before, which leads to that issue.

The easiest solution is to make a trigger other than “task newly created” or “form submission added” - would it work for you to trigger the rule on the setting of a custom field to a certain value or adding a tag to the task; or would that not work for your workflow process?

The only real way we have to solve it directly is to add a delay in firing certain rule actions, like that one; we’re really reluctant to add an artificial delay, but we are considering it…

I ran into a similar issue because I had an integration that created a Google Drive folder (via Zapier) when a task was created. However, because the task name was being typed as the integration fired, folder names were getting truncated.

I solved it by using another field as the “confirmation” of the task being ready. In my case it was a Custom Field called Status, in which the default value was set to “queued”. The rule was set to check for a new task being created and the Custom Field being set to “ready”, so the folder wouldn’t be created until after the task name was completely typed out, and the Status then changed to “ready”.