My Tasks for multi-day tasks II

My Tasks for multi-day tasks Tips and Tricks

I am struggling to figure out a good way to organize multi-day tasks in My Tasks. My setup is pretty close to the old version - sections for Today, Upcoming (7 days out), and Later. I sort by date and work out of the Today section. I have several tasks right now that I will need to look at daily for about a month, so I set the due dates to 4/18-5/6. I created a separate section for them, which worked great until the due dates started nearing, and they began to get sucked into my rules for Upco…

I’m opening a new topic to respond because the original was closed.

//The rules I set up exclude those sections so you can prevent the hassle of those tasks moving sections when you don’t want them to, yet still use dates if you want to.//

@lpb I do like your strat in general (and thank you so much for the clear explanations!) However, I do not understand this part. Let’s say I want to work on my task every day for the next 3 weeks. I set the date 5/17-6/7 and I put it in my “Daily/Today” section. Works fine until 5/31 – at which point my rules chuck it into “Upcoming”. What am I missing?

///I’d say you keep your multi-day tasks on one-side and have a single daily task that says “Check multi-day tasks in My Tasks” with the time spent attached (5 minutes?). That way you have the best of both worlds: a daily reminder with actual time spent on them, and you do remember to check on those tasks sitting in your My Tasks.

Bonus: the recurring task could contain a link to each task you need to check, allowing you to hide those tasks in the Later section of the My Tasks.//

@Bastien_Siebman I do like this and I think it might work! I think I would keep the time spent on the original multi-day tasks, though, since a recurring task will only show up in Workload the one time.

The rules I set up exclude those sections so you can prevent the hassle of those tasks moving sections when you don’t want them to, yet still use dates if you want to.

my rules chuck it into “Upcoming”. What am I missing?

What I meant was to make your rules more specific by including section names in the trigger. I believe you don’t currently do this so, regardless of section, any task is moved when it’s a week out or a day out. Instead, only have these rules apply to the Later and Upcoming sections:

So the Daily/Today section is protected; no rule is looking there.

If you’re using the Pending section, then you may want:

Does that help make it more clear?

@lpb I think what was throwing me was the trigger terminology “Task moved to a section”, since I wasn’t moving it. But I think you’re saying that to Asana, this just means to check that section only. So the first rule you describe looks like this: 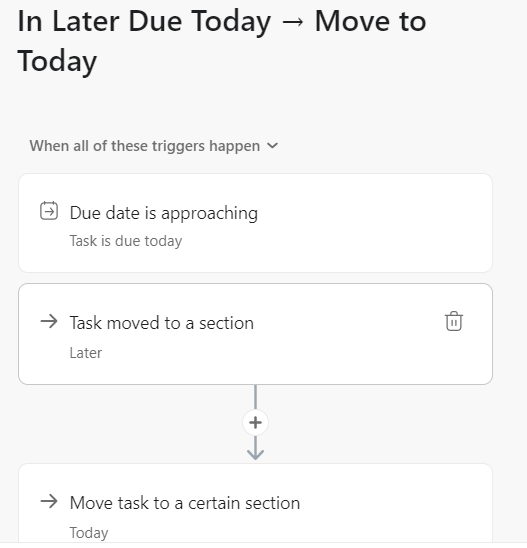 Thank you so much for the clarification!

Yes, exactly! I’m not sure why Asana chose to name the rules that way; it’s really “Task in or just moved to a section”. Glad you caught that; I’m used to that so I forgot to mention it.

This topic was automatically closed after 4 days. New replies are no longer allowed.