Making a form easier to find in a project - Forms Tab

We are going to be expanding our team soon, and we have Asana very heavily integrated into our business. We are about to launch a handful of Forms, and I must be honest that they don’t make accessing the forms very intuitive.

I basically had to create a task in Asana titled “How do I find and use a Form?” for people to read to remind themselves where to find that form. That task gets created in every new project, from the project template.

Call me overly simplistic, but why can’t we just have a button at the top of the screen in all the various task views that says “FORMS”, instead of making them remember to click “Customize” and go start scrolling for the Forms?

Keep in mind that all new users of Asana are already confused as all-get-out about the difference between a task, project, template, portfolio, form, etc. Forms are supposed to make things easier, and they’re GREAT for that, but burying them under the “Customize” button is very unintuitive.

I see where you’re coming from, but if Asana were to implement a “Forms” button, then the next person would ask for a separate “Rules” button, “Integrations” button, and so on.

Hi @Matt5, thanks for sharing your feedback with us! Not too long ago we did have a Forms tab alongside the project view tabs at the top of the project but after testing, our Product team decided to move Forms to the Customize menu.

That said, I’m moving your thread to the #productfeedback category for the time being to give you and other community members an option to vote for this feature!

Mike, I’m not sure I agree with you.

Forms are designed specifically for an end-user. Designed by someone who is well-trained in Asana, but the end-user need not be. They just need to fill in the form and submit it. Thus, burying it makes it harder for the average/noob to find and implement. As an analogy, it’s kinda like putting the transmission shifter knob in the glove box.

With Rules and Integrations, those are utilized by people such as ourselves that are more experienced with Asana.

I don’t mind having to go into “Customize” to make a form. But the end-users who have the Project open should have a button at the top for “Use Forms in this Project”.

Completely understand that. Maybe to even expand on that, is to have a customizable “menu” at the top right where users can toggle what they would like to see on the main project menu.

This way, if forms aren’t used in one’s workspace they don’t have to see it and vice versa

That I can agree with!

Agreed that an easier way for team members to use forms from inside asana would be great.
My workaround is to always place a link to the form in the Project Description. This way its always available in the project when thy select either the overview tab or the information button at the top.

Unfortunately, my Form is in a Project Template that’s going to get used hundreds of times in the coming year. When I paste a link to the Form anywhere in that Project Template, it always takes people to the ORIGINAL Form, and the task created by that form shows up in the Project Template.

Unless something has changed since I first created this Template back in March this year, that prevents me from placing a link to it anywhere.

@Matt5, are you using the updated templates or the older templates? According to me the Forms feature is not currently in the new template, so this will probably change in the future when forms are supported.

I’m pretty sure I’m using the updated template form, I did the “conversion” yesterday. I had already made a form prior to the conversion and it seems to work just fine, we ran a few tests yesterday and they worked.

Ok, so how do I find a form when I can’t remember what project it’s in? And is it possible to add the form to another EXISTING project? Or do you have to re-create the form from scratch for every project?

I absolutely agree with Matt5. After creating a form and giving it to people in my company to use nearly all of them thought it was awesome and then asked for the location in Asana where they could find the forms. Note most of these people do not use the same teams or boards as me. I told them I’d find out how to add that assuming it was available.

Have a look at this Idea:

Calling all Forum members: How does Asana squash your work worries? News

my organization was a cluster storm to put it lightly. Often context switching, scope creep, and miss-aligned priorities were the norm. So was being in a constant state of ‘Fight Mode’. By implementing a Google site with Asana forms for requests, we were able to tame the beasts. Those departments who stayed strong and enforced behavior change, by repeating the phrase “If t’s not in Asana I won’t remember to do it”, feel a weight has been lifted. Lately, I have been encouraging folks to use the…

I’m not sure how that would work when I’m using a form as part of a Project Template, because then each form is unique to each new Project. I don’t know that there’s a way to make the form request populate on the website when each new Project is created from the Template. It looks like the website is manually created with links to those forms, not automated. That’s not a criticism however because I see the ENORMOUS benefit of doing that with forms that will be used by many, many people.

Under each of the links, it goes directly to the form, and then whatever Asana rules I have built to do the work. This is lovely because I can rebuild as much as I need in Asana and the link doesn’t change.

So if you have a rule Build a new project when (insert customer field) it will build it.
(we don’t use projects for that we use Parrent tasks as deliverables and subtasks and action items).

You can also embed a form at the top of a slack channel in a bookmark. This has been helpful for our non adopters… aka Sales LOL

Forms are designed specifically for an end-user. Designed by someone who is well-trained in Asana, but the end-user need not be. They just need to fill in the form and submit it.

Hi @Matt5 , if that is the case, then perhaps it is not necessary for the form link to be accessible from the project itself, right? Most use cases require the results to be private to only the members of the project that will process the form data, not necessarily to the submitters.

What I have set up for my clients is similar to the website that @KimberlyAnn_DiCredic has setup, but you can create something similar to this within Asana by creating a ‘Forms’ project in a public team, accessible to the entire organisation so people know exactly where to find all the company’s forms.

In this project, each task is the title of a form, with a custom field next to it with a clickable link of the form. Note, project permissions need to be editable to all members for the links to be clickable. You can also add a ‘form status’ custom field to tell users whether to use the specific form or not or even status like ‘under construction’ or ‘coming soon’ ;). You could also add another text custom field with notes on when/why to use each form.

The below sample has worked like a charm for company-wide forms. 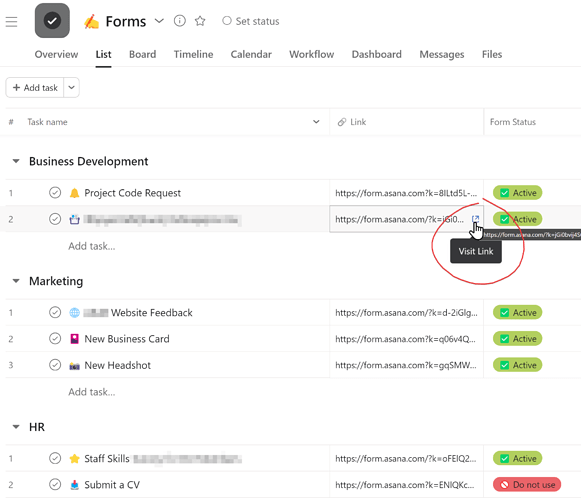 Richard, you make good points and I didn’t know about making clickable links.

The reason I am very reluctant to start a new project specifically for Forms is because I need the resulting task to show up specifically in the Project that the form was used in. That form contains “historical” data that we may need to refer back to at some point in time, and I would need some sort of automated way to ensure with 100% accuracy that the “form task” shows up in the correct project.

Hi @Matt5 , I think you slightly misunderstood the example ‘Forms’ project that I mentioned above.

This reference-type project simply lists all the organization’s forms in one place so they are easier to find by all members - think of it as the equivalent of a list within an email (gasp!), doc or a website with links to your forms.

But instead of those solutions, you can set a reference list within Asana like my above example which could ‘live’ in an org-wide public team where all your references could exist. So the ‘Forms’ list is just made up of tasks, each one containing a link to a specific form, i.e one of your numerous forms which are setup in your relevant projects (as they currently are now), possibly spread across numerous teams.

Therefore, the forms themselves are NOT set up in my example ‘Forms’ project - they still exist in your projects, and therefore the resulting tasks created from the submissions will still end up in the projects you setup the forms in.

Hope that helps clarify my suggestion!

Richard, thanks for the clarification on the terms here, and I could have been more clear about my situation.

If I used a “Reference Project” that had a hot-link to all the forms, someone is going to have to manually dig up the link for each of those project forms and manually create the task with the link to that Form.

I think you have a great idea for certain uses of Forms and I’ll probably use that idea in other situations, but unless I’ve utterly misunderstood you, there’s not a way to automate the creation of this Forms hot-link task. That’s going to be a lot of work for someone to do.

I misunderstood that you had so many projects being created, which would indeed require a lot of manual work for a single individual

But perhaps by adding a little bit of team work into the mix (and assuming that multiple people use the template daily to create their projects) you could perhaps set a convention/procedure for each person who creates a project from the template would then have to copy/paste the form link into a new task and place it at the top of the new project list for easy reference, while also multi-homing it to the ‘Forms’ reference project…

Not sure we are going to find a solution here in the forum for your specific case but I’m happy to discuss further over a call, DM me if you’re interested!