Allow user to define a specific order of rule execution

Since Rules can’t fire rules, perhaps it would be beneficial for users to be able to reorder the rules within a project? Is there a known order in which rules are ran within Asana. I assume top to bottom. Being able to change this order would be very useful IMO.

Is there a known order in which rules are ran within Asana. I assume top to bottom.

Not 100% sure but I don’t believe this is the case. I don’t think there’s any guaranteed execution order at the moment. @Forum-team can you confirm that? If so, then reordering wouldn’t have any effect; you’ll probably need a different Product Feedback item something like “allow user to define a specific order of rule execution”.

Gosh… hoping that isn’t the case. This would make some rules I have in mind a coin flip as rule order would be key. Interested to hear their response. Thanks @Phil_Seeman - updated the title as well.

Hi @LEGGO, @Phil_Seeman - at this time, Rules do not have a specific execution order, nor is possible to set this up when creating Rules.

Yep! Sure enough this seems to be the case.

- that’s a bummer. I set up the following Rules within My Tasks V2: 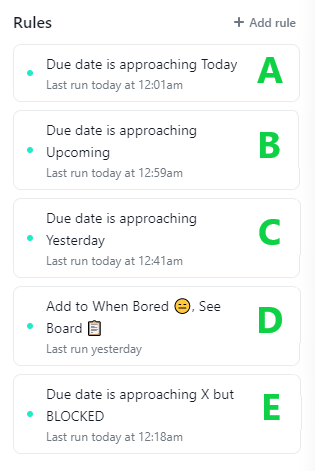 Rules A, B and C are setup to move tasks to their designated section IF the tasks are also unblocked, as seen in Rule A here: 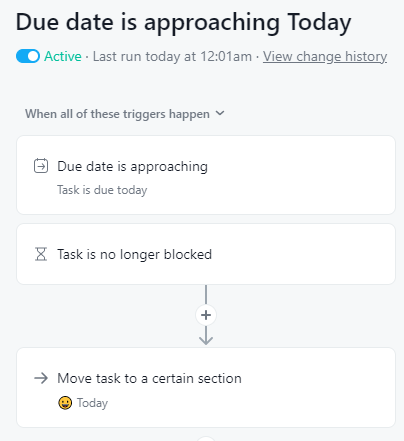 My hope was that Rules created FIRST they would run FIRST. Given such, I would be able to create Rule E which is the same as A, B and C except it doesn’t include the “Task is no longer blocked” trigger. Essentially, this would then move all BLOCKED tasks to a dedicated section so I could see which I might need to help get unstuck to do my part. It would do this because all tasks that were NOT BLOCKED would have already moved to their designated sections through Rules A, B and C.

Unfortunately, because Rules aren’t executed in any particular order, Rule E seemed to run before Rule A but not before Rule B or C. This caused all the tasks I expected to see in the Today section moved to the Blocked section instead

Because there isn’t a “Task is blocked” trigger, I am not able to accomplish this (and not have to worry about the order in which Rules are ran). Therefore, it seems I have to manually move blocked tasks UNLESS this is something Flowsana might help me achieve. @Phil_Seeman does Flowsana support Rules in My Tasks?

FYI that’s exactly how Flowsana’s rule execution order works (the only exception being the “create subtasks from a template” rule action which runs asynchronously from any other rule actions).

does Flowsana support Rules in My Tasks?

It does! The only caveats I have to add are:

I’ll explore the Flowsana rules for this, @Phil_Seeman. I definitely think the ability to consider work that is blocked or not would be a valuable trigger to include. For this specific use case, I can’t do without it

It would be nice to have the ability to reorder the rules under Customizations.

Upvoted!
@LEGGO I did a little testing on this after the Workflow feature rolled out, and I’m seeing that Rules execute in the order of Sections left to right.
That didn’t help my needs, but it could be a helpful thing to note for someone else.

After having two workflows contradict each other in their order (this forum Approval "Changes Requested" triggering "Marked as Complete" Workflow) I can confirm that the order is randomized.

Having a specific order of execution would be extremely helpful, Asana!

I’m experiencing this same thing. I need rules to function in a very strict order. Does anyone have any suggestions?

Asana, can you add this to an update? Rule Priority or Order?!?

I merged your post into an existing thread on this topic.