What you did was correct. I think it’s a bit hard to explain so I made a video and hopefully you get the idea…

Again, this is not the ideal solution as @Bernie_Orelup wrote before.

I would suggest you to establish Asana conventions with your team.

Personally, I would treat sub tasks as mini checklist and/or use Sections instead.

Thank you for the video. That actually DOES add it to the calendar but I would call that a workaround since it requires additional steps when creating subtasks. Not only that, but it would also require that we give each subtask a unique name, or else you wouldn’t know what task it’s related to (imagine all subtasks in the project with the same name “Send ORG files”) So I wouldn’t be able to just duplicate the subtask, I would have to rename it too.

This also clutters up the task list. There is no reason to be seeing subtasks both under the parent task AND in the main task list.

I wish that we’d just be able to see subtasks in the calendar without all the hussle.

“I wish that we’d just be able to see subtasks in the calendar without all the hussle.”

That’s true and I understand your frustation. However, having all substasks in Calendar view is also not intuitive since we don’t know when it’ll get cluttered (Tasks + Subtasks combined).

Since you mention that your company received design order for clients, I would suggest that you use Order ID on the task name, followed by each tasks required to complete the job. That way, it is easier to identify each task in list or calendar view, and it’s also search friendly inside Asana.

I have to disagree about the calendar getting cluttered.

First, tasks in the calendar are blue and subtasks are white, so it’s very easy to distinguish between them.

Third, there can be a button on top of the calendar that can turn on and off the viewing subtasks - just like there’s a button to turn on or off weekends.

For client design, what you suggest wouldn’t be pleasing to the eye. There is one design order. That would be the parent task. There are many steps that need to be taken along the way until the order is approved (the design, sending files to main office, sending for approval, revisions (each revision round would be another subtask), sending revisions for approval, sending final work to client.)

So when you look at the task list, it’s now pleasing to the eye with ascending order numbers. Then, each order will have subtasks and/or be moved to sections. If I’d make a new parent task for each step of the way, every order number would have like 10 tasks in the list and THAT would be cluttered. But this is just a preference and everyone should organize their projects how it suits them.

You’re right. I’m just offering the workflow from my point of view and it’s okay to disagree. After all we’re trying to find a workaround while the feature you requested isn’t available yet.

@Zvi_Twersky this has been a major topic for years now in Asana, and what can be offered are mostly workarounds. If you are looking for a native Asana way to do it - it is not there unfortunately.

There are other catches with the workarounds also. Lets say you add teh subtask to the project. In fact it does not become a task, but remains in subtask. So if you go to advanced search > tasks in this project > it will not show. If you change the filter to subtasks it will show. So again depending on what you need you need to use a different workaround as each one provides a solution, but not a full one

Can you create a dependency for the parent task to the subtask?

I understand this doesn’t put the subtasks on the calendar, but we’ve already established that the current solutions aren’t really how you would like to set this up.

@Christine_Bolton interesting approach but wouldn’t work for us, but again, maybe it’s only an issue with our specific workflow.

We do digital album design. The first and main task to be done with all orders is the design itself. Since subtasks are not in the calendar, and the due dates on this specific task (the designing) have consequences for the designers (if late on design), the design itself must be the parent task and it must be able to be marked as completed when the first design stage is completed - even before the rest of the subtasks are not completed yet (internal tasks, revision requests, approval for print, etc)

The next subtask (which is still assigned to the designer) is to upload the photoshop files to the main office. When uploaded, they assign this subtask to me. After I confirm that all files have been received, I mark this subtask as completed. This subtask doesn’t have to be marked as completed by the designer as there is no due date for this (and I need a way that the designer can see that I downloaded the files so that they can delete them from their computers when ready)

Then there are other subtasks that have to do with revision requests.

Just for fun, here’s a screenshot of the workflow: 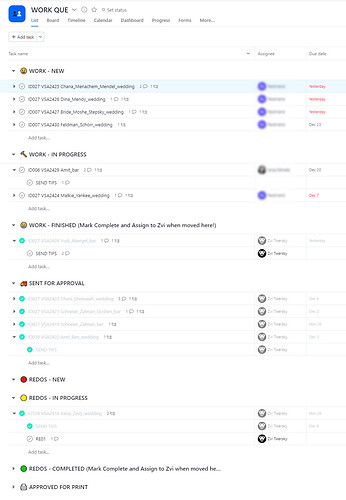 Ok, before I offer another option, what version of Asana are you using?

I’ve just started using Asana less than two weeks ago so I’m still on the free version. I know dependencies are a premium option. I will definitely be purchasing a premium plan but I see that there is a free trial period and I don’t want to waste my trial period while still getting acquainted with things that are included with the free version. As expected, I am constantly changing the workflow, sections, and settings; until I feel that we achieved a comfortable and productive workflow. Then I will start learning about each premium feature, what it does, and how it can add value to us. Only then I will start my premium trial and eventually get an annual plan.

The only other suggestion I have (trying to understand your process via the web) would to create 2 separate projects.

There are going to be some workflow standards to be set, but when you look at the team calendar the design subtask and the parent task will now be visible.

Note: You can create a template task that already has the project linking in place, and duplicate the task for each new order.

@Christine_Bolton This is BRILLIANT! Opened up a whole new way of organizing the workflow. Good thing I asked this when I’, just starting out… I can’t imagine having to redesign the entire organization with thousands of orders already in place!

I’m glad I was able to help!

@Christine_Bolton I’m having one small issue with this. My template, which is a task in the parent project, has a subtask linked to the child project list (the one that designers will be using), is showing up in the child list, even though I made the parent project private and didn’t assign anyone to it.

Yes, I added colored icons and a red “DONT TOUCH” label but since there is no way to restrict editing to only one specific task (even in the pro version), I would really not want this template to be showing there. I don’t want anyone to accidentally delete or change it. I would be much more at ease if it wasn’t even shown to them.

I know this isn’t the best, unfortunately, in Asana, templates of any form are not the most advanced features.

Anyway, there is another issue to look out for; when you delete either the parent project of the linked child project, it doesn’t delete both, so you are left with an orphaned task in multiple places (depending on how many places you linked the parent) - so although I won’t be deleting tasks often, it’s something one would need to keep in mind.

when you delete either the parent project of the linked child project,

typo:
when you delete either the parent project OR the linked child project,

I understand why you wouldn’t want to go that route, there just isn’t a better solution (that I am aware of). Once the task is assigned out to someone, or leaves the parent project, there isn’t a way to lock it down anymore.

Also, the deletion issue is purposeful on Asana’s part. The idea behind this is if you delete a project or a parent task and the task is assigned to someone or another project the workflow of that individual or project can be disrupted if the task is still essential outside of the one you have deleted. @Marie, I’m not misspeaking here, am I?

No, you are not misspoken. It works the same in Windows; when you have a folder and somewhere else you have a shortcut to that folder; when you delete the parent folder, the shortcut will not get deleted - it just becomes a “broken” shortcut.