I have a situation where we create tasks related to each partner we are recruiting - that task gets assigned some fields, like did they participate last year, what level are we recruiting them at, etc - and houses any comments made on that task which would be a paper trail for our recruiting efforts.
We then send a form to said partner. The answers to the form end up being linked to custom fields that tell us pertinent information relating to how they want to partner with us.
As of now, when that partner fills out the form, we have to manually merge the original task and the newly formed task in response to the form by updating the original task with the new custom fields and copy over the form resposne.
My hope was that I could use the “Merge duplicate tasks” tool, but I found that no matter which way I merge, I lose information from one of the tasks - fields, comments, etc.

Is anyone familiar with a workaround here that would allow me to automate this process of merging the two tasks and maintaining comments and custom fields and/or at least take some of the manual work out of it?

This wouldn’t be that big of a deal except we have to go through this process for 40+ partners every year and imagine there has to be an easier way.

Any thoughts much appreciated

Hi @Chandler_Ferguson Agreed, the merge is not a full merge but should be.

perhaps adding the task as a subtask to the other task? I need to try this out myself.

Hmm adding as a subtask does make the form response more readily available but the parent task still doesn’t assume the custom fields. Could be a workaround. However I wonder with all of the cumulative clicks over time I would have to make to open it up and refer to it, I might as well go through the steps of manually updating the custom fields on the parent task and copy over the form response?

I would also add the issue to the defects list. Bugs - Asana Community Forum

I’ve never done that before. You just mean go through the process to report a bug? Thanks!

I would as the intended outcome is incomplete.

I have had a similar issue happen where I merged tasks that were the same, but I lost comments and the thread when I merged the tasks and now I can’t find them. Is this something that there has been an updated answer to? I need those comments and questions back. Thanks 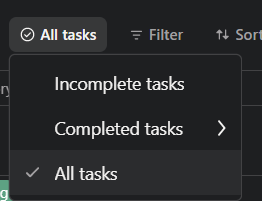 I did this, and was informed that it wasn’t a bug because it operates as intended. Not complete in my opinion at all, as “merging” implies you are taking two entities and combining them. What they actually have is the ability to close a task in favour of another one, and note an update on the other task that they did that. (not the desired effect).