For forms submitted by an existing user, auto-capture them as the task creator

Everyone at our company has Asana it’s a mandatory tool used.
I have worked to get most of the company to intake their requests through Asana Forms. However, a few departments who work across the board are struggling to switch their forms into Asana from Google because there isn’t an auto-capture of who filled it out.
Example from our security director “what ideally i would like is a form i could send people to and have them create tickets for things and have it tag the ticket as having been created by person x rather than rando automation or having to rely on people to put their names in each time”

This is holding me up on adopting because those people are telling me “why would I move from google forms?” which means people are bouncing between different tools and not having a consistent experience.

Because this capability doesn’t currently exist and would need to be added as an Asana enhancement, I moved your post to the #productfeedback forum section so people can vote on it. (I just did!)

Thanks, @Phil_Seeman Appreciate it! I was trying to put it in product feedback but it wouldn’t let me for some reason.
YAY! This would be awesome for me to get the last few stragglers more into Asana

+1, this is a great idea. Especially valuable because of the lack of Globally-Accessible Projects Available to Entire Organization (ie, because it would provide an alternate path for people to submit tasks without having to be a team/project member). I kinda envision this working in one of two ways. The form would check if the submitter has an active Asana session and, if present, either…

Or maybe even the option of doing both these things. @KimberlyAnn_DiCredic curious if either of those approaches were what you had in mind with your original suggestion, here?

So right now I have custom fields for CS and Sales (the highest requester groups) and when they submit and select their name it automatically adds them as a collaborator.

Those all feed into the Main Request Project where they can comment if there needs to be a change to their original submission before being triaged. I have these requests gated until the working group has done their weekly triage, then they add the parent task to the Customer or Prospect it pertains to. This then allows the CSD or Sales rep on that Customer or Prospect Project to work with the team.

I gated it like this because we had Trello previously with not gating so due dates would change and we would think we went insane and missed something. So now if the requester needs to change something we have it documented.

I ask the Asana Gods a lot if since everyone at my company gets an Asana account when hired… could the forms eventually recognize them and add them as a collaborator automatically. No luck yet, but I just keep asking

Has there been any movement on this request? It’s a big one for me too!

No, nothing yet, sorry.

STILL, hear our Tech team complain and they won’t entirely switch to Asana because of it

Along the same lines, we would like to be able to have a form submitted by an existing user be auto-assigned to that task. This was an option with the Wufoo-Asana integration but isn’t with the Asana forms?! How does that make sense? Therefore, if we move over to Asana forms, we will actually have to do an additional bit of work to fill manually in the assignee field that we don’t have to do with Wufoo…

Any possibility of getting an ETA or seeing where it is on the roadmap?

Same here, we are relying more and more on Asana forms in the org but everyone complains they keep having to enter their email address and name in the form. It also generate manual work of having to tag the person to the ticket afterwards. That definitely waste people’s time and blocks lots of benefits for approval workflows for example

I would still very much LOVE Asana to do this. But I did find a workaround using Google forms.

A few groups won’t switch to Asana until it has this capability. However, those who need to keep track of the requests feel they don’t have anything to remind them.

I enabled the email notification on a Google form. Then used the email on the asana project as to where to send it. (this is under the down carrot next to the project name, import, and email.)

It populated into the project, and the person who submitted is the task assignee… at first, it was like. Not what I wanted. But then realized when triaging, they can put it to the actual assignee, and then the submitted is automatically a collaborator.

I would love it if Asana could create a workflow like this, only it automatically adds the submitted as a collaborator. (I have a rule to override it now) I want no pushback when it comes to Asana. haha 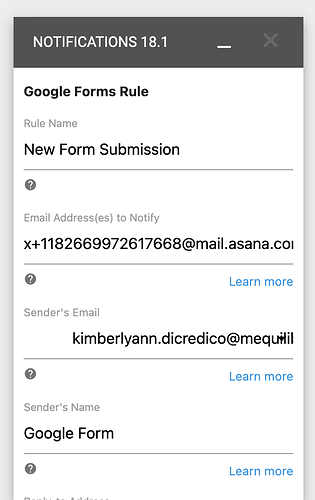