Tracking progress of task across columns

In order to onboard our clients, we have created a single project with multiple columns for which we keep moving the task from one column to the next until the client goes live on our platform which is when we complete the task.

My question is, can we build a report which can enable us to see when each task entered and left each column?

You could use the API to do so, but I am not sure if you’ll have access to all the information inside the task stories. @Phil_Seeman sorry to ask again about this, but can you share with us the reasoning behind the cache mechanism again? If the data is there, I can definitely build a dashboard for you!

Yeah, you’re probably not going to be able to use the API to build a reliable reporting of that data due to the gaps in story-reporting that can occur. In this case, it would be that if the same user moves a task between columns multiple times within a 24-hour period, without any other users making changes to that task in the interim, you likely will only see the most recent move, not all of them. You might want to test to verify this, but that’s my understanding of the behavior and how it would work in this case.

So in this case we would have to use webhooks to watch for column changes, correct @Phil_Seeman?

No, webhooks won’t help - they have the same limitation - you will not get a story-change webhook if that change event is discarded by the consolidation logic.

I am surprised because you get the webhook call seconds after the column change, not 24 hours later

24 hours is just the time frame that it looks back for the last change, it’s not a delay in transmitting a change.

But you’re right, though, now that I think about it - it seems you should get a story-change webhook for each column-move. You’d have to read the task’s stories at that moment, get the change that just occurred and then store it in some non-Asana data store for later retrieval and reporting - because if another change and a consolidation occurs, that story might get deleted in the consolidation.

it seems you should get a story-change webhook for each column-move. You’d have to read the task’s stories at that moment, get the change that just occurred and then store it in some non-Asana data store for later retrieval and reporting

Exactly my point, thanks for the clarification!

There is no integrated app/plugin that can tracking the task time between columns?

@Bastien_Siebman @Phil_Seeman sorry for the mention, just to be sure that you guys saw my doubt about this kind of tracking.

I haven’t seen any app that will do that. Doesn’t mean one doesn’t exist but I would kind of doubt that one does.

Hello again @Phil_Seeman.
Thanks for your last reply.

I tried some integrations but with no success

Reading this thread I’m thinking if is it possible to build this tracking.
Can you help saying if it is possible (if you know that, of course) and guiding me with some links how can I do it? I’m a developer btw.

The best thing would be if you can start a new thread in the “Developers & API” forum section with your question, since we’re going to move to a development-related discussion. Thanks!

@Fillipe @Phil_Seeman Screenful Dashboard for Asana supports this out of the box. You can see how long each task stays on a column on average, and see the trends over time. Since Asana API has gaps in data, some transitions within a day are not recorded as described in previous comments. 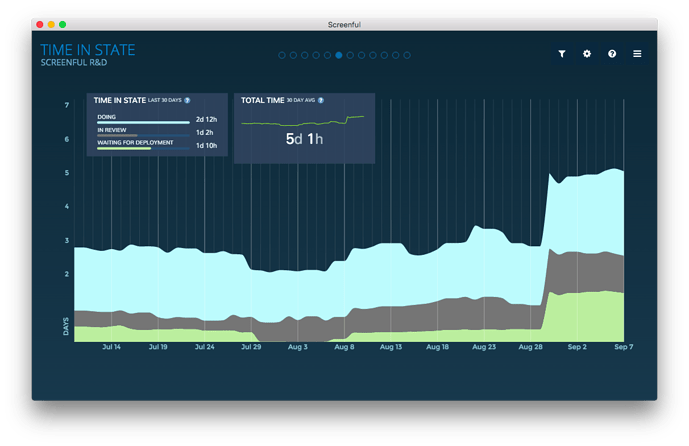 You can learn more about this feature at the Tour page.

2 Likes
Track time a task spent in each column