There’s no update. Just switch to another platform.

Such a shame. I’m keeping my fingers crossed. I really love Asana. I hope they get on to prioritizing this for all of us.

Ciao @fabiio… sorry, been away for a while so I’ve let my monthly checkins lapse…

Just a reminder that it’s been 2 years since this feature was talked about during the keynote presentation as part of Asana’s Vision.

I’d really like to see faster and more reliable sync’ing with google calendar. The calendar would become a much more useful tool in my day to day workflow. I find it hard to believe this continues to work as it has for so long. It’s not a useful tool. It needs a full integration so that you can sync instantly to your google calendar.

Have a look at this existing feedback request I think this is what you are looking for: Real time, two ways Calendar integration

I know I’ve said this somewhere, but I can’t believe that NEITHER this feature OR Recurring Tasks on certain day/week of month not the actual day have been done. I, personally, have never been on a team that didn’t use that way of setting up meetings at least somewhere. There’s no way to have Asana replace or integrate these tools because of the lack of native functionality provided by Asana or a native integration. As of today, the combined like count of both these threads would be 1,146, making it the third most requested feature. I know they’re different, but at a minimum one of them should be done, because neither just means there’s this gap in this all in one solution.

I think Asana has a lot of strong spots, and overall I like the app, but seriously, this is just gross. I don’t know a better way to say it. A good way to emphasis it though is a short point on when I was talking to a rep for Asana. I’ve used Asana for awhile in a couple different environments, and recently brought it to my new job. When I had a meeting with an Asana rep and a couple directors to talk about the product, they were selling and really going into different points. When they talked about the calendar view of Asana though, they basically just said “yeah it’s a calendar view, and we have integrations with other products like google calendar, but it’s pretty straightforward and there’s not much to talk about”, then without missing a beat moved on. Just knowing how weak a point this is for Asana, I had to bite my tongue not to bring it up to my own detriment. If someone knows the product, it’s obvious that even Asana is aware how weak they are in this area by the way they speak about it on a call like that. I just hope that they’re working on addressing this as much as it seems they’ve worked on talking points for it at discovery meetings like that…

I hate to say it, but I don’t think this will happen.

What other applications are there that have calendar functions and offer a real-time 2-way calendar sync? I.e., two separate applications, each with their own fields and quirks, syncing? I can’t think of any.

There are applications that link up to 365 or Google and add details to events, but that’s not the same. The primary calendar applications is always dominant, the secondary app just hooks up via api and edits details. The event/task/item/entry only exists in one place - not both. (If there are examples of true 2-way, real-time sync, please share because I’d love to see how they achieve this. )

The fact of the matter is, Asana’s tasks are very different than calendar entries. Yes, they have start & end times, dates, descriptions and titles - but that’s about all they have in common. What they don’t have in common? Attendees, locations, comments, followers, attachment styles, parent/project/sections, rules & constraints, formats - not to mention the differences in back-end function.

I wrote a real-time two-way sync between Asana and 365. I originally wrote it entirely in python, then had to rebuild half of it in power automate after an organization policy update. It is very complicated, but it works well. There are still bugs every month or two, which is totally manageable, but it’s not perfect - because these are two different applications with unique, evolving data sets.

There are exceptions that can’t be easily handled, especially as it relates to attendees, deletions, and adding/removing from projects. I’ve built workarounds for them, but in the end result in some level of data destruction. This approach also requires a middleman / broker to keep a record of all tasks and events because the asana and outlook api’s handle deletions & restores differently.

I want this as much as everyone else that’s posted here over the last 5 years, but having actually built a solution for it, I can see why the feature hasn’t been released - and may never be released.

I do think it’s worthwhile for the folks at Asana to share the current status of this request - I know I’m not alone in wondering if this feature is no longer being considered - or if there really are some heroic developers over there tapping away to make our calendars a bit more organized.

ClickUp has 2-way real-time calendar updates. I get it’s hard, but it’s kind of the market they want to be in, right? Given the customer interest and the fact that the solution already exists in a competitor’s platform, it is truly inconceivable that this is still an outstanding issue.

Todoist, which albeit is a somewhat different use case, also has very excellent 2-way real-time calendar integration.

Also, my point still stands that those calendars have more advanced scheduling than what Asana has. Either Asana needs to build that functionality in, or they have to make the integration better so that those use cases are addressed where I have to rely on an outside application because of lacking native functionality.

Lastly your points together are kind of self defeating “The fact of the matter is, Asana’s tasks are very different than calendar entries” followed by “I wrote a real-time two-way sync between Asana and 365”. There ALREADY is an integration, it’s just terrible. I don’t have a perfect write up about what I need as a feature request, but I know I’ve seen other applications that do it. I would ask they do that. Here is a screenshot of what I want. All I need are those times in there, I don’t need much more on the calendar, and if I could just have that sync up to the few fields in Asana it would be great. 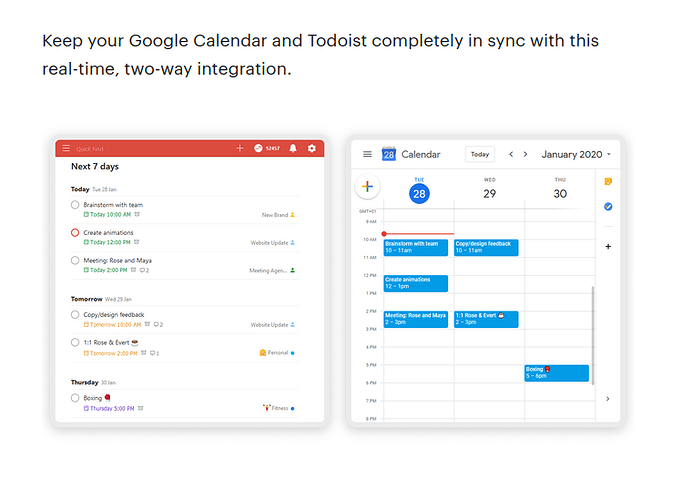 I only see the same calendar subscription url option for click up — https://help.clickup.com/hc/en-us/articles/6304782034839-Sync-ClickUp-Calendar-with-an-external-calendar

I hear you - and while I know I built a solution that works, I wouldn’t want to support it (which is a major factor, I’m sure). I could make a more in-depth case on the development challenges, but really just posted to share a different perspective on the issue.

That being said, for view only integration, I definitely think there should be a better solution than the url subscription method.

That todoist sync is the real deal. On the linked page, you can see how many options need to be configured for it to work properly and the special characters you would need to add for duration on the todoist side.

I’d love to see something like this in Asana. just wouldn’t be quite as simple as ‘switch on.’ Very good example though - thanks for sharing.

At the time I originally posted this topic I was experimenting with clickup, todoist and other applications that were offering real-time, two way sync and thought their solutions seemed to work well and was puzzled why Asana could not match this feature given that it appeared they had the larger user base. In the end, I preferred the overall Asana offering to those other tools and I have been using the reddiapps tool for years to work around this limitation. It works pretty darn well. Recurring events are a bit problematic and task duration is not really available but my main interest is to simply have the task names and start times syncing both ways so I can manage reminders and the rest of my life in coordination with my works stuff in Asana. The reddiapps folks have added a nice feature to their solution for me that changes the color of a task in the google calendar to indicate whether it is complete or not.

I figured that given how long this has been going unsolved that there must be some bad blood between google and asana.

One of Asana’s largest competitors Monday.com has had this feature natively for quite awhile now. I really don’t buy the “its too hard to do” excuse some members have given.

If for some reason Google does not play well with Asana; I am not sure what the excuse is for not having this feature for Outlook.

Was suggested to provide feedback and suggestions on technology advancement to allow tasks to appear in the regular calendar timeline/sync tasks to the general calendar and not in a blocked off ‘Other Calendars’ section. This will help us be able to have an accurate timeline visual of tasks needing to be spread out throughout the day.

If for some reason Google does not play well with Asana; I am not sure what the excuse is for not having this feature for Outlook.

Totally agree. No way is it “too hard to do” - Todoist, ClickUp, Monday.com and Trello all have native 2-way sync with Gcal. It’s SO FRUSTRATING that Asana doesn’t have this. If we didn’t have our processes tied into Asana which makes changing tools difficult we’d have left a long time ago due to the lack of this feature. In my love / hate relationship with Asana, almost all of the hate is due to the lack of integration with Gcal.