I’m having a similar issue as Darren. I followed the instructions for creating a project with dates. When I change the dates in the progress view bar, my dates are not shifting. I’ve just spent two hours going in an manually changing deadlines since we shifted all of our releases by one week. Is this a bug that will be fixed?

When I change the dates in the progress view bar

Are you referring to changing the project start and/or due dates when you are creating a new project from a template, or to changing either project or task dates in an already-created project?

when the due date changed I changed the ending date for it. The due dates didn’t change

Right - Asana does not shift tasks in an existing project. The recently-released feature that’s the focus of this forum thread only shifts task dates when you first create a new project from a template. So what you’re mentioning here will not cause dates to shift.

When you say you set the new dates: did you do it specifically on this “Step 2 of 2” screen during the project creation process? 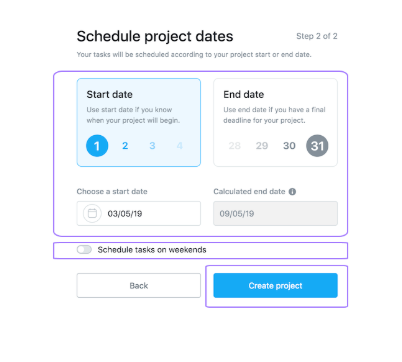 That screen is the only place where entering a start or end date will cause tasks to shift - and you can only enter one or the other (start or end), not both. (You mention setting both start and end dates so I’m thinking this is not the screen you used.)

Yes, I created a project from a template. I had started with the beginning date and then changed and did it using the end date. The dates in the new project are still the dates from the template. They did not change.

Ok, got it! Sorry for all of the follow-up; I was trying to make 100% sure but I guess you were accurate when you said

I’m having a similar issue as Darren.

@Marie @Natalia, it sounds like Darren and Kari should file bug reports on this, yes?

I’ve gone ahead and moved this conversation to a new thread to avoid getting mixed up with other questions asked on the announcement thread.

@Kari_Stober, could you please share a screenshot of the project details of your template (see example below)

Could you also try to create a new project from your template and share screenshots of each step you’re taking to build your new project from the template? This would be super useful to help us understand what is not working correctly here!

Looking forward to your reply!

Great news, glad to hear you worked it out and thank you so much for keeping us posted!

A note for the future updates…it would be awesome if you could select some tasks and have then based on a start date and select other tasks based on the end date. We do video launches every two weeks and about 1/3 of the tasks are based of when the shoot is and begin right after it (start date). 2/3 of the tasks are based on when the video release is. Right now I set it up with the end date in mind and then have to go and update 50 tasks with new due dates so they correspond with the start date.

I’ve tried the template with dates and have it set to an end date, but they never match up. I end up having to remove all the dates and starting over. Having the option to set a due date based on “6 weeks from X” and have a start and end date option would be AWESOME!