I am not sure how this would be applied. What is the use case?

Task names are unique, or should be, so how is naming all task added to a project the same going to add to organization of your tasks?

So here are some more details on my use case:

Since the template is prenamed, such as “New Opportunity Template” this would have to be changed every deployment we do. Some of our customers are having 5-10 deployments a day, and I am the sole project manager that manages all of these.

Having this rule would cut down on a lot of manual entry on my part. Does this make sense?

An example from my end is the following:

We have a video creation, optimizing and uploading it to Youtube process set up in a project.
We have one basic task template and various custom fields.
Per video task we have a custom field where we select in which language we need the video.
Based on the selection a subtask is created and assigned to the relevant team member to take care of translation work.

Now when they see the task they would just see the standard name which makes it also difficult for them to locate the task in the time tracker that we use (as various subtasks would have the same name).

If the rule would allow task renaming this would be very helpful for this.

In general we have other procedures where it would be helpful to rename a task based on selections in a custom field.

No, not at all. You are creating a rule to update a task name that you yourself own. You can simply change the task template or change the rule. Something has to be changed.

Why would you have a task template named Deployment just to change it to New Opportunity Template or to any other name?

then appending task name is what you want.

Per video task we have a custom field where we select in which language we need the video.
Based on the selection a subtask is created and assigned to the relevant team member to take care of translation work.

You have already made the selection, so why not name the subtask properly in the rule?

Now if we had dynamic task naming using { } that would be cool. (I think I posted this before)

This could happen 5-10 times a day where I add the New Opportunity Template to the Deployment Section and manually have to rename it.

ok. Just seems to be a need for a problem that doesn’t exist. You say easier, but I say why blow 10 rules to do what task templates were designed to do. If you have 10 templates, you have 10 opportunities for unique tweaking of a process.

Anyway, thanks for sharing the use case.

It does seem counterintuitive. But as a lone project manager, I would rather create rules than templates, especially as we expand our product base.

Thanks for the suggestions and help!

I know that world all to well

You have already made the selection, so why not name the subtask properly in the rule?

Then I basically need a rule per different video.

I want the video topic + the language and the rep name mentioned in the task title which won’t work at the moment. 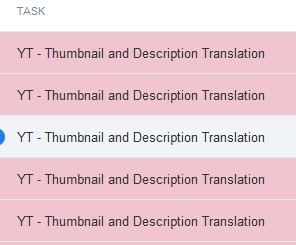 so you need to append the title.

FYI, Flowsana has a rule action to modify a task’s name (and it includes the ability to do variable substitution using the { } type of syntax).

Hi Phil! Does the modification rule also work for subtasks?

@Laura_Screnci according to me it does work on the subtasks.

@Paul_Grobler has it exactly right! You can have any Flowsana workflow apply to subtasks if you choose.

I’d like a feature like this. We route all of our incoming work items through forms and every request has the task name “Design, Web & Email Requests” submissions, that we then have to go and rename. Sometimes that’s 50-60 tasks coming in at the same time.

It’d be great if I could rename the task with a field from the form submission that’s already tied to a text field.

It’d be great if I could rename the task with a field from the form submission that’s already tied to a text field.

But @John_Loftis, you already can do this with forms (this thread is more about tasks that don’t come in through forms): 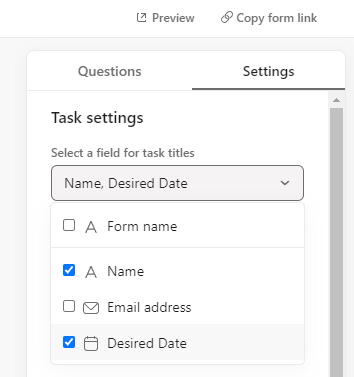 You can choose any set fields in the form, in any order, to become the task title.