Running on Firefox 68.0.1 on mac os 10.14.5.
In My Tasks view, sorting by Due Date.
The ‘Today’ and ‘Upcoming’ headers do not display.
The ‘Later’ header does display.
A bunch of tasks are listed above ‘Later’, showing as unclassified, yet they do have classification as either Today, Upcoming or Later.
The remainder of tasks are collected under the Later header, though they contain a mix of Today, Upcoming and Later classifications.

Ho @Anthony_Del_Balsoa and thanks fo reaching out!

This is actually an expected behaviour, the Today and Upcoming Sections do not support sorting; so they’re not available when you sort your My Task list by due date or projects. We have a #productfeedback thread on this topic, so if you haven’t yet add your vote by clicking on the “Vote” button at the top of this thread

Sort tasks by Due Date WITHIN Sections

Thanks @Marie for the response. I have voted for that feature request.

That said, this still looks like a bug, since when sorted by Due Date, one of the headers is available (Later), and it contains tasks that are categorized differently.

An expected, or designed result, given your definition, would be to list all tasks w/o the incorrect and incomplete sorting.

I ran a quick test and was surprised by these results:

(When Sort = Project, then the total of 47 is presumably due to multi-homing, hence not relevant)

When Sort = Likes, then Today, Upcoming, Later are not present, uncategorized 39, for a total of 39

Yes, that’s correct, when sorting your My Tasks by due date the later section still appears and tasks under it should be sorted by project.

SO sorry for the confusion @Anthony_Del_Balso, I’ve gone ahead and escalated a task to the team for them to reconsider in a future update!

Hi @Stephanie_Oberg and thanks for looking into this!

This is difficult to work out without screenshots of your My Tasks and access to tasks details, so if you have any doubt, I’d recommend reaching out directly to our support team, you will be able to share more info with them and they’ll be able to take a close look into your account to help you understand wether or not this is an expected behaviour.

I’ve figured it out. Another data architecture issue, whereby tasks can have conflicting inherent attributes and the behavior is not well coordinated between them, combined with variable groupings (or lack thereof) among the Today/Upcoming/Later sections depending on type of sort. The conflicting attributes in question are Today/Upcoming/Later vs Due Date. E.g., note that having a Due Date equal to today’s date is not the same as being marked for Today. Asana data architects have chosen to have the assignment of a Due Date override the assignment of of a T/U/L status. The Due Date sort appears in this order:

So yes, we wanted sorting, but TBH I wanted it to be a bit more controllable and predictable. :-/

The actual list of unique tasks (for me) totalled 39 as of the time I ran my experiment.

Dear @Marie !
I have the same issue. ( And all the members of my workspace)
If we are choosing the “none” sort at the my tasks, the tasks in the today, upcoming and later sections are incorrectly showed. ( for instance todays task are upcoming, and many today tasks are not even in the appearing.
I’m attaching a screenshot about it.
Can you help to fix that issue?
Thank you in advance for your feedback! 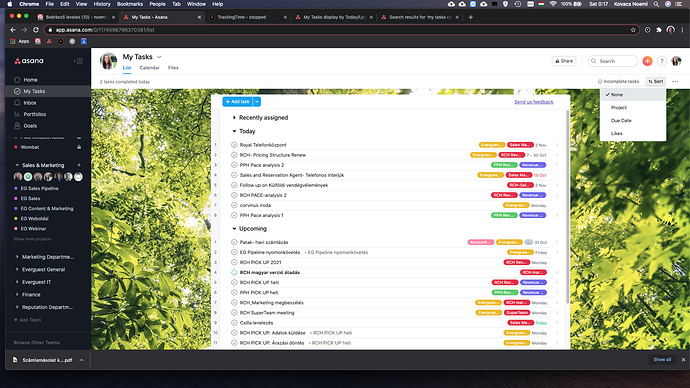