I would like to make a rule to move 'Completed tasks to a section of own choice - when it has been completed for XX days - cause in many projects we operate with Done-done or an Archive which we never delete.

Are you saying that the task needs to be moved XX days after it has been marked complete?

(FYI moved this to the #tipsandtricks forum section, as it’s not about Asana API development)

Here is a work around that I believe should work:

Trigger: Task marked complete
+
Trigger: Task is overdue by (amount of days you want to wait in order to move task)

The key to this whole sequence is when you add the second trigger, you must select “When all triggers have occurred”

Thank you Mike - a lot

I will try that

Hi @Mike_Tammaro - have you successfully implemented this Rule?

I’m also trying to setup a similar structure - move tasks that have been completed within the past 2 weeks to a specific Section. And then move Tasks completed more than 2-weeks ago yet to another Section.

When I setup the Rule in a similar format to how you have listed out (I’m using it based on Overdue by ‘Minutes’ in order to speed up testing) - it never runs - I’m assuming that is because the 2 criteria aren’t met.

I’m assuming that once a Task is marked ‘Complete’ that it is no longer considered in the “Overdue” logic. So the 2 statements are never actually true at the same time.

But maybe I’m setting up my test tasks and flipping their due dates and marking them complete in the wrong order to trigger the rule.

Just curious if you actually implemented this Rule successfully.

I implementet it with succes - the way Mike describes

Hi @Claudia_Zöllner & @Mike_Tammaro - I am still having issues with this exact rule and would love to get it working.

How did you execute this rule so it works despite the third bullet in the screenshot above from the Asana Guide?

After messing with the order of operations for the triggers and some other factors, it seems the root cause of my issue is simply that the rule will not fire for Completed Tasks (as Andrew_Cramer mentioned above).

Thanks for starting this thread and chiming in!

Could you provide screenshots of your current rule in place without showing sensitive information? I would be able to understand your problem better!

Here you go - I used an exact time as the due date in order to speed up testing and not need to wait until 12:00 AM each night. 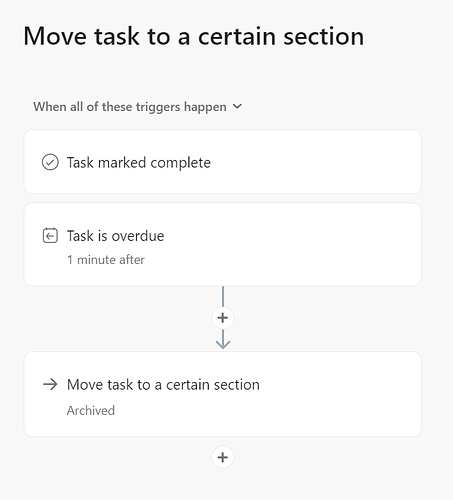 So here are some suggestions I’m thinking of:

Thanks. To test suggestion 1, I created a new project where this was the only rule in place. Still no luck.

Regarding suggestion 2, I also thought 1 minute might be too tight, but when I remove the “Task marked complete” trigger from the rule, the task always moves to the section I want it to exactly 1 minute after the due date. Doesn’t seem like that’s the issue.

For suggestion 3, I have tried both ways unsuccessfully. Have you had success in getting this to work on your end?

Seems really odd. It is working fine on my end. There is either some other rule hindering that rule or it is a glitch that requires asana support. @ambforumleader any other suggestions?

I have the same issue, and only this rule is implemented in my test Asana project.
A support here will be really appreciated, as when the completed WOs number increases, it becomes hard to manage.
Thanks in advance

Hi everyone! As it stands, the "Task is Overdue "and “Due date is approaching triggers” only work for incomplete tasks. I just tried to reproduce this but I’m afraid the rule is also not working for me. I see our support team has escalated this question to our Product Team and I will update this thread as soon as we have an update on whether this is working as expected or it’s a bug

Interesting… is my Asana broken?