Agreed! This would be a massive time saver. We are running interior design flows and onboarding new employees, so having roles that we could plug in right when the new project starts would save our project coordinator 10x the time.

I think it would be really awesome if you were able to have pre-determined project roles as a part of a template. Today, you are only about to assign a role once a user is added as a project-member. I think it would be powerful to know what roles need to be mapped.

Here is a screenshot demonstrating this: 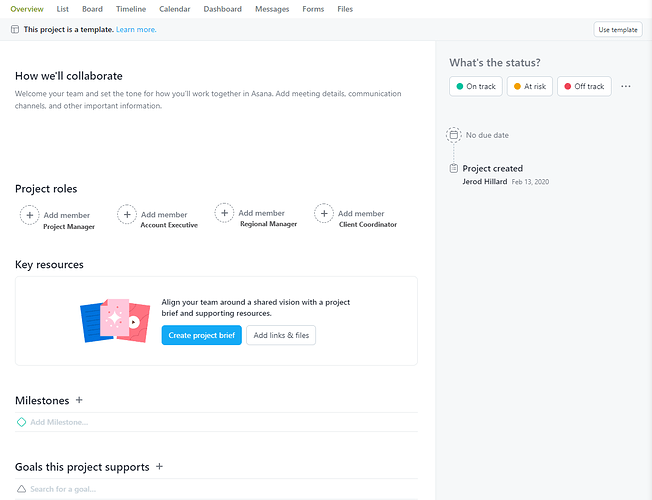 Same as this one?

We have templates for all of the projects but find it tedious to assign each individual person to tasks, especially if we have to make a switch to staffing. Is there a way to template the ‘job title’ assigned to each task and link the person to that particular job title? For example, we have a team leader, analyst, lawyer, associate, and designer on each project. Each task is performed by the same ‘job title’ from project to project, but the person performing this role may differ. (We have mul…

@Forum-team we may need some consolidation here?

Thanks @Phil_Seeman. I didn’t do much digging to see whether this feedback was already provided or not.

The first link you provided pre-dates the introduction of Project Roles and Overview and seems to suggest how the role of TASKS can route assignments to users. Something I am interested in as well, but isn’t quite the same as what I am suggesting. I am thinking just for reference sake - knowing who is serving what role in a project from the Overview. That said, it could serve as the “routing table” if Asana was to allow you to assign tasks in a template to a role instead of a person.

The same goes for the 2nd link.

I think my feedback is maybe the first step to enabling what these other two posts are suggesting. Do you agree?

Well thanks, @LEGGO, now you made me go back and actually read the other 2 threads.

I think my feedback is maybe the first step to enabling what these other two posts are suggesting. Do you agree?

I do indeed! Your post adds the new dimension of project roles to the equation, so it’s definitely an addition to the idea and not repetitive of the others.

I think project roles could be part of the solution to being able to have roles as assignees in a template, and/or for permissions.

At the same time, I also think about the overall role(s) that one can define for a user in the user profile: 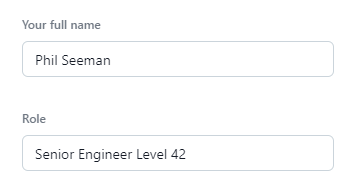 If a user is always going to have the same role in all templates, then instead of having to set that role in every one of their projects on the Overview, it might be nice to also have the option to define the role globally in the profile - yes?

@Phil_Seeman I do like that idea and thought the same. It works probably 80% of the time for us but not always. We have many people that play different roles on different types of projects. Also, depending on the project it may call for a uncommon role to be filled.

Additionally, there would have to be some layer of smarts to know which person is filling that role assuming many could. For instance, is this project a part of a particular region or market that suggests one user over another.

Being able to establish roles at the project level would be nice. I wouldn’t be opposed to when adding roles you could select from a list of unique ones in a org. This selection then offering a list of individuals defined as that role. All of this with the ability to create a new role or assign someone to a role that doesn’t otherwise match it heir profile.

I think being able to first define roles to be filled in a project template is a great start. So much more that could be built off that possibility.

@Forum-team what are your thoughts on all the above? Templates 2.0?

Oh man, I just realized that with Project Roles you could do some really powerful things with Rules. For instance, when certain triggers are met specific individuals could be assigned or set as collaborators based on rule assignments. You wouldn’t have to define the individual but rather rely on the role mapping to route to them.

I added my vote to this one. I think @LEGGO you are on to something here. Hope this could be considered in the future.

Thanks for providing this feedback @LEGGO and for adding some additional context @Phil_Seeman and @Paul_Grobler! Roles being included templates would be

We’ll pass this onto our Product team and hopefully it is something we can see brought to life in the future! I’ll keep you all posted

@LEGGO just to be clear, I didn’t mean to suggest to use the profile role in lieu of project roles. My point is it would be cool to be able to use them both. Perhaps profile roles would be the “base” but could be overridden by a project-specific role.

When creating a project template, it would be great to create “Template Assignees” so you can add many tasks automatically to that specific person. For example, I could add a “PM” as the assignee of many tasks, and get asked who is the PM of that project when using that Template for a new project. This would automatically add a lot of tasks to that person.

This could also be connected with project members and roles

This is a great idea, @Nicolas_Martinez! We are working on some improvements for Project Templates and I’ll let the team know about your suggestion. I’ll keep you posted if this is something we implement in the future

Hi @Nicolas_Martinez , I have the same problem but I currently solve it by having a custom field on my project templates called “Project Role”. Once the project is created, simply filter on the custom field and assign away!!

So when I create a new board from my template, I can then just add members and set their roles. Once I set their role on the overview tab, then it would automatically go through and assign all the appropriate tasks to them.

This is a cool workaround. Not ideal but better than the alternative of going task by task to assign it.

+1 for this idea - I came here to post a similar idea (but worse) that this would absolutely solve. (And in a much better way than my crappy idea.

Sorry for the late reply, but thank you for sharing your solution!

Is there any way to define “roles” for a project template, then assign tasks within the template to that role rather than to a specific person? Then, when a new project is created from that template, you could put in the people who will be filling each role, and the tasks would be assigned to them.

For instance, on the project for “ACME Enterprises Marketing Campaign,” we might assign Robert to be the Account Manager, Amy to be the Creative Designer, and Jolene to be the SEO Consultant. But the “XYZ Company Marketing Campaign” project might have completely different people in those roles. (And if Jolene quits or gets an extended illness, etc., maybe her role in the project is reassigned to David, who would automatically get the relevant tasks at that point. And so forth.)

This seems like it ought to be possible, but I’m not seeing how to do it (or anything similar).