I have a project with rules to automate comments based on due dates as a way to send reminders to my colleagues. For a couple of weeks I am no longer able to delete one of those comments if I need to.

Steps to reproduce: go to an auto generated comment triggered by a self created rule, click next to it and option “delete” won’t appear. 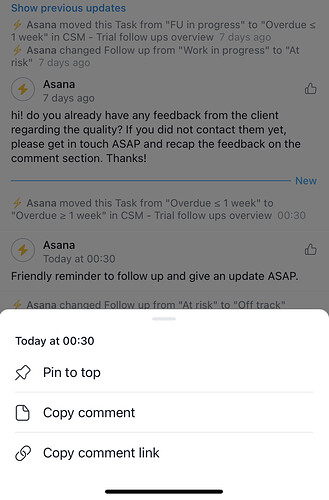 Hello @Mai_SB
have you ever been able to comments created by a rule?
As far as I know they cannot be deleted. You can only stop the rule that triggers them.
To find the relevant rule go to the project the task is in and check the rules via the customized menu to edit it.

Now it could be that the person that set up the rule has restricted editing it as per the below screenshot. Then you won’t be able to make any changes to it

Hi @Andrea_Mayer thanks for your answer. Yes, I was able to delete those comments up until now the same way I am able to delete my own comments, but the option is no longer there since a week and a half ago or so.

Unfortunately stopping the rule is no option because this is a master project that acts as a reminder service for multiple other projects. I am in charge to update the due dates based on input from others, but because of the big workload sometimes I fail to update the due date on time and as a consequence the rule is triggered and a colleague who is on track with his task gets a comment. Therefore the need to sporadically having to delete some of those comments.

I am the one who has created both the project and the rules.

Hm this is strange as I have never been able to delete such comments created by rules. I also tested again now and for me it does not work.

I have an update on this one

They have explained me that: the way rules register these comments was changed. The previous behaviour was that when a Rule ran it would show that it ran as the Rule Owner which allowed Rule Owners to delete these comments. Now however, it registers that Asana created the comment and with that the Rule Owner is no longer able to edit or delete it the comment.

To clarify: this was a change only on the back end because those comments have always shown up as “comment placed by asana”.

so unfortunately deleting them is no longer an option

Ah okay thanks for sharing the update @Mai_SB !