Interestingly enough, With the new Task Templates feature, Asana added the option to ‘Set a relative due date’ 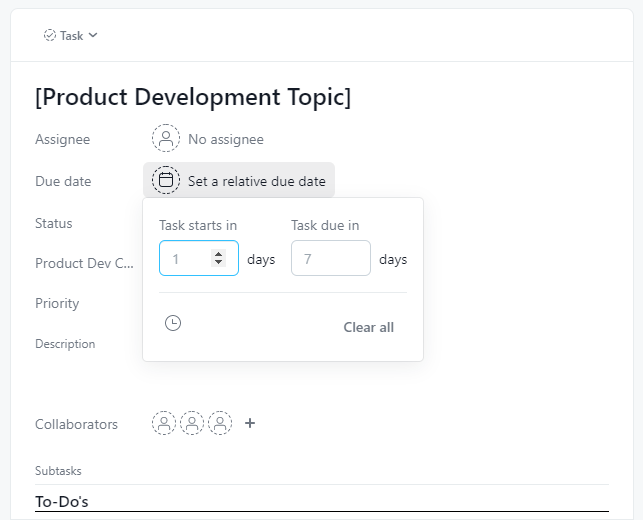 how did you manage to get the dependencies shifting from a custom field?

Hi Tina,
The dependencies don’t shift automatically.
I just made a company-wide field in tasks for time estimates, for better planning of my week.
It has 5/15/30/90 minutes, 2 and 4 hours, or 1 day.
Makes sense?

If tasks don’t have duration that affect start and end dates then you can’t call it a Gantt chart or even a timeline… It doesn’t project manage, it just lists tasks of projects…

If a person is tracking at once:
->10 projects
->that have 5 resources assigned to them
->and have more than 20 tasks in total
Every day that person checks for delays and advancements to schedule:

There is no chance of keeping an accurate timeline of what is planned. I agree with what a couple of people on this topic chain suggested, that it isn’t project management, a timeline or a gantt chart without that automation. It’s just listing tasks…

Don’t get me wrong, Asana is slightly better than most (maybe all) software of this type for task management , but you can’t really call any of them project management apps (examples: click-up, mondays.com, etc. TeamGantt has 50% of the automation, but lacks so many other functionalities that Asana has).

The basics of PM are scope, cost and schedule. This missing automation for Asana removes the “Schedule” element. An app that simply records starting dates and due dates in a list that has to be updated manually doesn’t project manage, it just lists tasks of projects…

There is an automation that helps reach half way, it only updates the start date of the first task downstream and doesn’t work correctly every time: create rule - task is no longer blocked>>set due date to “0”.

Now, I have noticed that people have been requesting this functionality/automation for several years and I know that there is the argument for not having it because it removes flexibility (it doesn’t if you have the option to make those dependencies flexible or not) and I know that users that require that flexibility and believe they will lose it have their tasks and project set up wrong… But then again, nobody should need to be a PM expert to use Asana successfully anyway, that’s the point

@Goncalo_Cal Well Said!
This is a must!!

Asana, is there any update to this issue ?

I’m new to Asana having used MS Project to generate gantt charts previously, and this really is a deal-breaker…

Is a Deal breaker as I’m analyzing this solution for our company.

Need this function, can’t use tool as PM without. Task due dates change all the time as upstream tasks get delayed. As PM I only work with project start date - task duration and task dependencies.

I am very interested in this feature. Currently using the free version but we’re wanting to upgrade in the next few days.

Currently we use a project set up with the board view to get a picture of contracted designers workload and daily/weekly schedule. We use projects as clients, parent tasks as projects, and subtasks as tasks. We have to put in the title of the parent tasks estimated times to currently if we want to estimate if a person is overloaded and we can’t make deadlines/need to shift work.

I know that timeline could potentially change the way we function within asana and I don’t want to spend the time converting our process to timeline if it won’t function in a way that is at least as helpful if not more helpful and efficient than what we currently do. Image blurred but you can see how it basically is set up 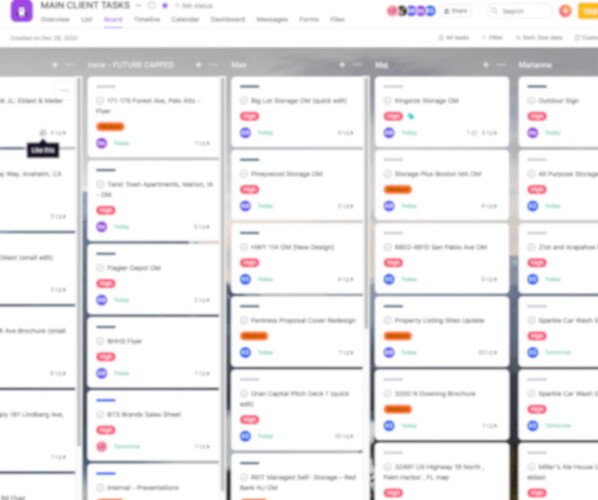 Yeah, it’s also part of the PMBoK Project Management standard: You first figure out the activities, sequencing, duration and only afterwards you do the start and end days.

Please fix this!
Thanks

welp…I’m sure you found out quickly rthat you cannot use subtasks as tasks. Sadly. The system isn’t designed for it and its a mess.

Your best hope is to have Projects must be clients in one team, and large projects for clients must be projects in another team or something with tasks being tasks and subtasks being carefully used. Wait until you have to track change orders and ensure you bill for all the subtasks. Its currently impossible in the system anyway we can see. Also, not allow rules apply to subtasks is a dealbreaker, when it comes to making sure task statuses are updated correctly to indicate to the other parts of the team the status of the task for billing, etc.

This really is a glaring deficiency in this application and makes it entirely unusable for most PMBOK styles of project management. I can’t believe that it’s coming up on 4 years now since this topic was created and no movement from the Asana team on supporting it.

100% agree… Must have duration for tasks

Start and end time is insufficient for planning purposes.

Looks like auto-shifting dates is available only if the changes are made in the Timeline view. I just tried it and it works. 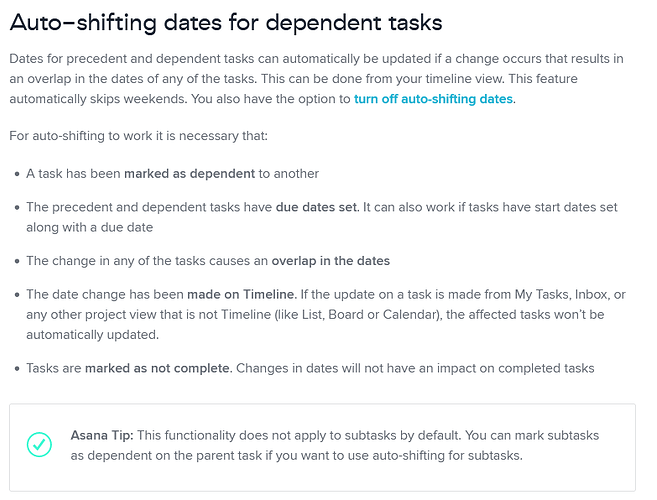 No, that’s what I’am looking for. I wanne say “This thing has a duration of xyz hours, days or weeks”. Please add this basic feature to the software.

“This thing has a duration of xyz hours, days or weeks”.

Understood, it does not exist indeed, Flowsana from @Phil_Seeman I believe has this.

+1
Create a task with a duration (in days) but no start or end date.
Project management workflow as I know it: capture all tasks, dependancies, and estimate due dates. Only after that do you start assigning start and end dates.

I don’t understand how this feature is still not available. One start date, durations, and dependencies, timeline done. My company cannot switch to Asana without this. Everything else is superior IMO compared to others, but this missing feature makes the timeline great until a task doesn’t get done on the scheduled time (which…never…happens??) and then the timeline is literally useless. Also, ignoring weekends would be nice. I’m not trying to schedule out a 7 day work week here.

When you say “sync manually” do you just mean update data by hand?